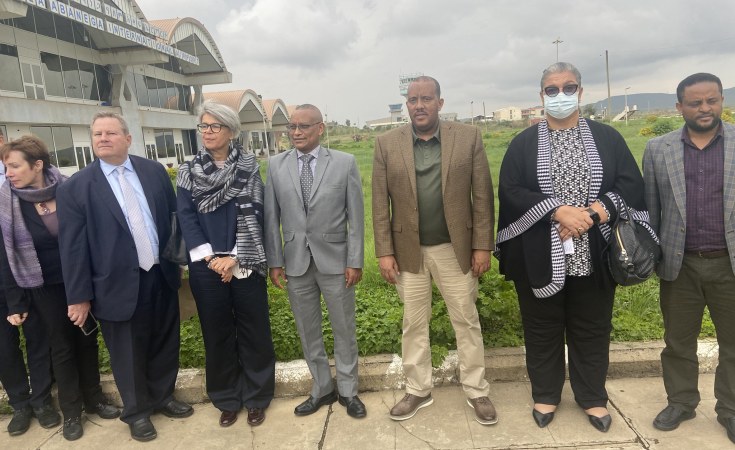 They have also discussed about "the hurdles standing in the way of peaceful settlement of the war on Tigray in all its forms including the siege that has been imposed on the people of Tigray. He expressed his readiness for peace while reiterating [government of Tigray's] unwavering commitment to end the suffering of our people."

Getachew's tweet did not explain what "Tigray's position on negotiations" were. However, Debretsion has already told the local Tigray TV last week that Tigray wanted to end the war with peaceful resolution, but to hold peace talks certain preconditions must be met initially. Among others, "basic services must be restored," he said

The diplomats are in Mekelle today following a meeting held between Ambassador Redwan Hussien, PM Abiy Ahmed's security advisor, and Dr. Gedion Timotheos, Minister of justice, with the Horn of Africa Special Envoys of the UN, the EU & the USA as well as Ambassadors of US, France, Germany, Italy and UK to Ethiopia, in which the former two briefed the later on the ruling party's position about the peace talks between the federal and Tigray regional state governments. Redwan said that the federal government was "ready to talks anytime, anywhere," and that "talks should begin without preconditions; he added that the diplomats were "allowed for a round trip to Mekelle."

While announcing her trip to Mekelle, Ms Weber said that she has met with and held "encouraging" discussion with Deputy Prime Minister and Minister of Foreign Affairs, Demeke Mekonnen which focused "on peace talks and resumption of basic services to Tigray."