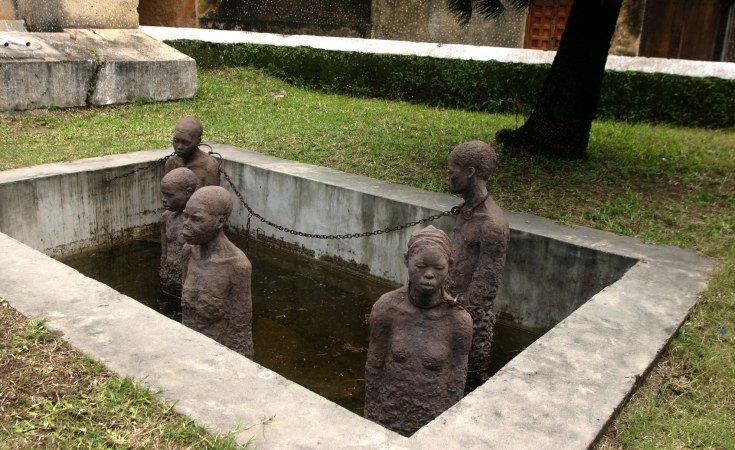 There is a renewed campaign by African countries for reparations to be paid by European countries for the transatlantic slave trade and other colonial-era wrongs committed centuries ago.

The slave trade -- which affected millions of Africans -- was the largest forced migration in history and one of the most inhumane.

The exodus of Africans was spread to many areas of the world over a 400-year period but reparations still haven't taken place -- and the process has been slower than many Africans had expected.

"No amount of money can restore the damage caused by the transatlantic slave trade and its consequences which has span many centuries, but nevertheless it is now time to revive and intensify the discussions about reparation for Africa," Akufo-Addo said at a summit on reparations and racial healing in Accra, Ghana.

Ghana was one of the points of departure for many of those enslaved in West Africa and, for the Ghanaian leader, the time for reparations for colonial crimes and slavery is "long overdue."

Some European nations that played key roles in colonial crimes and have hesitantly in recent years rendered an apology for their actions.

President Akufo-Addo said "the entire continent of Africa deceives a formal apology from European nations that were involved in the slave trade, the crimes and damage it has caused to the population, psyche, image of the African the world over."

At this week's summit, participants from across the world agreed to solidify one continental strategy to ensure that Africans get the needed compensation and justice due them for the devastating effects of the transatlantic slave trade on the continent.

The African Union -- which has often been criticized for doing very little to ensure that reparations happen and very quickly -- is pushing back.

John Ikubaje, who works at the AU commission, told DW that the continental organization deserves a bit of credit instead, for the key roles it has been playing in recent successes in reparation negotiations by some African countries and the return of stolen artefacts.

"The issues of reparative justice did not start today, it started long time ago and African Union has been doing a lot in this regard," he said.

According to Ikubaje, "reparation has been one of the focus [of the African Union] and you know actually what is happening on the continent in recent time, in terms of return of artefacts, they are not unconnected with the African Union declarations in terms of the themes of the year."

Germany this year accepted to pay Namibia €1.1 billion ($1.3 billion) as reparation for genocide committed during its colonial-era occupation of the country.

That was after the European nation returned skulls of people murdered during the Namibian genocide a century ago. Tens of thousands of Namibians were slaughtered between 1904 and 1908.

Germany at the time colonized the Southern African nation and was responding to an anti-colonial uprising. The victims were from the Herero and Nama people who were indigenous Namibians.

A ceremony was performed in Berlin in August 2018 at a church service to hand over the remains to the descendants of the Herero tribe.

Berlin was accused of taking too long to formally apologize for massacre. It had for years refused to accept responsibility and apologize. In 2016, Germany finally said it was prepared to apologise in principle.

The search for a king's remains

Rwanda is also now making a case for the return of the body of their former King Yuhi Musinga who was exiled in 1931 to neighboring Democratic Republic of Congo where he died.

His body was never seen nor returned to Rwanda for burial and Rwanda has accused the former colonial masters of having taken the remains of the king to Belgium.

King Yuhi Musinga was deposed mainly for refusing to collaborate with the Belgians as well as refusing to be baptized in the Roman Catholic Church.

After negotiations between the two countries, some artifacts have been returned to Rwanda by Belgium. But now Rwanda has asked Belgium to return the remains of the king.

Andre Ntagwabira, a researcher at Rwanda cultural heritage academy told DW that it is sad that no one knows where the king's remains are.

"Among those I asked, they all checked in their museum's collections and none has found King Musinga's body."

For blogger Kelly Rwamapera, the onus is on Belgium to produce the king's remains.

"Of course one has to blame this on the Belgians, the colonizers because they are the ones who banished him they knew where he was and he died so they had all his information they should be knowing where his body is," Rwamapera told DW.

Consolidating and solidifying the struggle

John Ikubaje from the AU's secretariat, the African Union Commission, said that "these are developments that the African Union is working on and will continue to work with different stakeholders that are working along that line" to get justice for Africa.

He said beyond the return of artefacts, compensations and apologies for the past crimes the AU's current structures and major policy programs are to ensure that Africa moving forward doesn't remain subservient to the West.

But there are some activists who say retribution will mean the pulling down of existing global structures that continue to keep Africa beneath the rest of the world.

Professor Horace Campbell, a renowned peace and justice scholar based in the United States, told DW that structures and systems that promote racial capitalism must be disbanded.

"We need new structure that treats all Africans and all humans as human beings and there should be no hierarchy of human beings," he said.

For years campaigns for compensations for colonial-era crimes have been scattered.

British playwright, Esther Armah, who heads the Armah Institute of Emotional Justice, told DW that the continent of Africa must push harder on all fronts and avoid any loose ends in the campaign for reparations and social justice.

"So we need to fight harder, do more, engage together but we also must remember that part of the legacy of enslavement is how we see each other and how we treat each other as global black people," Armah said.

For her, social healing is also key to make up for the damages caused centuries ago.

"Africa needs emotional justice because we have to do our emotional work which is about severing how whiteness sees us and that impacting how we see each other," she said.

The African Union is now assuming a key role in formulating a continental framework and strategy that would guide the process of achieving anticipated reparatory justice for historical injustices moving forward.

Makmid Kamara from the Africa Transitional Justice Legacy Fund said this posture and strategy from the continental body should lead to much gains in the shortest possible time.

"The only person that should not be optimistic is the person that is dead," Kamara told DW.

"Hope is what keeps us alive, and like you mentioned the Namibia example, people have been engaging, people have been campaigning, some people have dedicated their lives to this call. So we are hopeful and determined to continue this campaign for reparative justice and healing."

Some European nations have only apologized for the past crimes but continue to be hesitant in paying monies as reparations. There is still a long way to go, though, for Africa to get what it really yearns for.

Alex Ngarambe in Kigali, Rwanda contributed to this article.