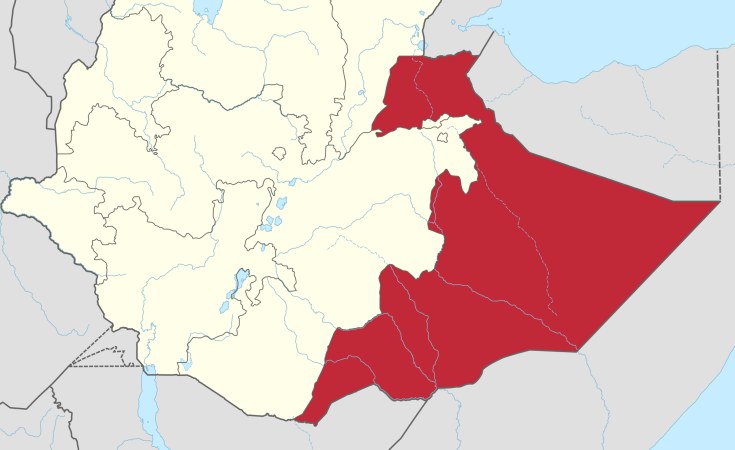 Ethiopia's Somali region is mobilizing against al-Shabab militants to prevent further incursions by the group.

The region had been hailed as the most peaceful in Ethiopia since Prime Minister Abiy Ahmed came to power in 2018. But that was put to the test three weeks ago when al-Shabab fighters forced their way into the region, igniting a deadly confrontation deep in Ethiopia.

Ethiopia has now amassed troops along the border for possible military operations against al-Shabab. But the Somali region is also mobilizing community leaders including religious scholars, women and traditional elders. Business leaders have pledged funds and pastoralists have donated livestock to the security forces. The apparent goal is to resist infiltration of al-Shabab's ideology in a region known for its tolerance and peaceful cohabitation between various faith communities.

Sheikh Mohamed Hassan Burawi is one of the clerics who spoke out against al-Shabab during a recent government-organized gathering in the region's capital, Jigjiga.

"They want to manipulate people by saying they want to spread religion and jihad," Burawi told VOA Somali in a phone interview. "We have to give people awareness that what these men are preaching is not jihad, but it's independent of the religion."

Burawi said the Somali region does not need al-Shabab's intervention, and said the scholars are obliged to speak at mosques and inform the public about the militant organization.

Samira Gaid, a security expert and executive director of the Mogadishu-based Hiraal Institute, said the community appears for now to be ready to reject any al-Shabab incursion.

She said al-Shabab has been struggling to build a support base inside Somali Region.

Although extremist groups in Somalia so far have failed to set up permanent bases in Ethiopia, they have succeeded in recruitment. Ali Diyaar, commander of al-Shabab's Ethiopia front, and several other commanders who were reportedly involved in the recent incursion are from the region. Al-Shabab has also recruited from other Ethiopian communities, including from the Oromo.

The picture that is emerging from the region indicates the operation against al-Shabab fighters has been lengthy and more complex than previously reported by authorities. It appears security forces have been engaging the militants until at least late last week.

Two Ethiopian officials, one a diplomat and the other a security official who requested not to be named because they are not allowed to speak to the media, admitted that some of the al-Shabab fighters have reached their target -- a mountainous area that stretches between the Somali and Oromia regions.

The number of militants who reached there is estimated to be between 50 and 100. But Somali Region officials repeatedly reported that al-Shabab militants who entered Ethiopia have been crushed. They ruled out the possibility that al-Shabab fighters are organized as a fighting force inside the region.

"Since then, people in the rural areas and villagers have been hunting them, but their remnants have been apprehended yesterday and the day before in different locations," Gurey said. "They are on the run. Some are trying to return to Somalia. Some are thirsty and don't know whether they are going. All that remains is clearing up."

Officials believe al-Shabab wanted to reach the mountainous area near the small town of El Kari located close to the border with Oromia. The region's officials confirmed the militants have been courting locals in that vicinity for at least a year. El Kari is in an area where locals have some grievances stemming from land disputes, and where some locals may feel their concerns are not being addressed by the local administration, an official said.

The social integration of the locals is more connected to the southern regions of Somalia. The area is also strategic, mountainous and with enough water to support a farming and pastoral community.

Officials believe al-Shabab was building a local cell for at least a year. On July 15, five days before the al-Shabab invasion, regional security forces conducted an operation in the El Kari area that killed a local cleric identified as Sheikh Mohamed Hassan Osman. The region's security chiefs accused him of being the al-Shabab "worker" in the area.

Osman's body was displayed by the authorities, who described him as an al-Shabab commander. He allegedly fought against the security forces. Officials said they confiscated weapons during the operation that led to Osman's killing.

"The information we have is that this man was important to al-Shabab and a pillar for their attempts to destabilize Ethiopia," Gurey said.

He said al-Shabab's target in this incursion was the El Kari area, which Gurey argues proves the information they had about Osman was correct.

Authorities alleged Osman possessed extremist views and was known to the authorities for many years.

"The view about him was that he is an extremist who will cause fitnah (trouble) sometime," Gurey said.

Al-Shabab vowed to fight the Ethiopian forces and also has been conducting its own mobilization along the border.