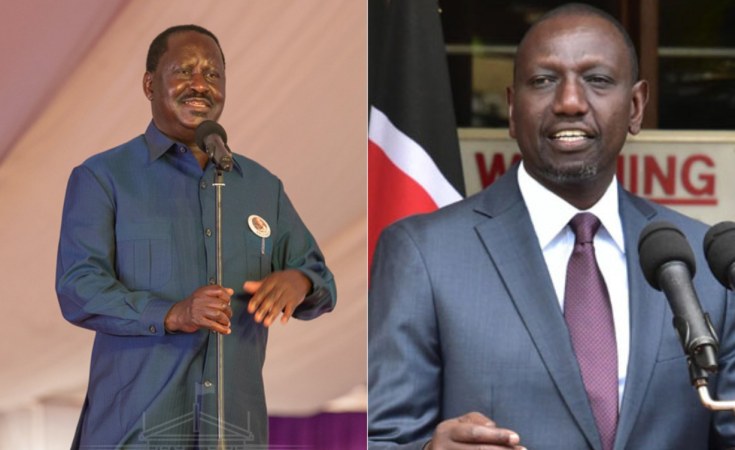 Nairobi — Kenya was sitting on the edge on Thursday as a leading provisional tally narrowed difference between frontrunners in Tuesday's presidential election to a 0.36 percentage point gap translating to about 48,000 votes.

Citizen Television's provisional tally which eclipsed Nation Media Group's on Thursday after reporting results from over 43,000 polling stations compared to Nation's 37,908 remained unchanged for over an hour.

With less than 3,000 polling stations to go in Citizen Television's tally, the two candidates were starting at a crucial homestretch where a 50 per cent threshold is key to bagging the presidency.

A candidate is required to garner 50 per cent plus one vote nationally in addition to 25 per cent of the vote in at least halve the counties (24) to be certified as President-Elect.

Odinga had just surpassed Ruto's numbers after narrowing a 2-point lead the UDA leader had opened on Wednesday as the tally entered the homestretch on Thursday with nearly 13 million votes tabulated.

NMG's tally which was leading on Wednesday crossed the 6-million-mark for both the two candidates after lagging behind for hours with the gap between Odinga and Ruto narrowing down to a percentage point.

The Independent Electoral and Boundaries Commission (IEBC) had at the time already shared statutory Form 34As from 99.9 per cent (46,174) of the 46,229 polling stations spread across the country.

Chebukati had reported the national voter turnout at 14.2 million (64.6 per cent) on Wednesday based on voters identified electronically using the Kenya Integrated Election Management System (KIEMS).

IEBC reverted to using the KIEMS-based register as the primary identification mechanism following a Court of Appeal ruling on Monday compelling the agency to use the electronic register permitting the use of the printed (manual) roll only in cases of technology failure.

On Thursday, Chebulati urged Kenyans to remain patent following an anxiety caused by different results tallied by the media.

IEBC Chairperson Wafula Chebukati told news reporters at the National Tallying Centre at the Bomas of Kenya in Nairobi that the electoral agency would give a final turnout figure once the number of voters identified manually is verified.

Ruto took had taken an early lead on Wednesday opening a 2-point gap between him and his chief competitor, Odinga, in a tight race that saw the gap narrow from a high of 6 per cent.

With results from 23,705 polling stations tabulated Ruto's votes stood at 3.7 million compared to Raila's 3.4 million votes out of 7.2 votes tabulated at the time.

The electoral commission had reported a 56.1 per cent KIEMS-based turnout at 4pm on Tuesday, an hour before voting closed with 12 million voters having voted at the time up from 6.5 million who had voted by midday on Tuesday.

Despite having the least number of presidential contenders since the re-introduction of multi-party politics, Tuesday's presidential election was billed as a high-stakes poll with the two top contenders --Ruto and Odinga -- emerging as clear frontrunners.

The two other candidates in the race -- Agano Party's David Mwaure and Roots Party's George Wajackoyah -- hardly managed to poll beyond 1 per cent in most opinion polls which projected the proportion of undecided voters to be as high as 5 per cent with another 5 per cent of likely voters said to have withheld their preferences.