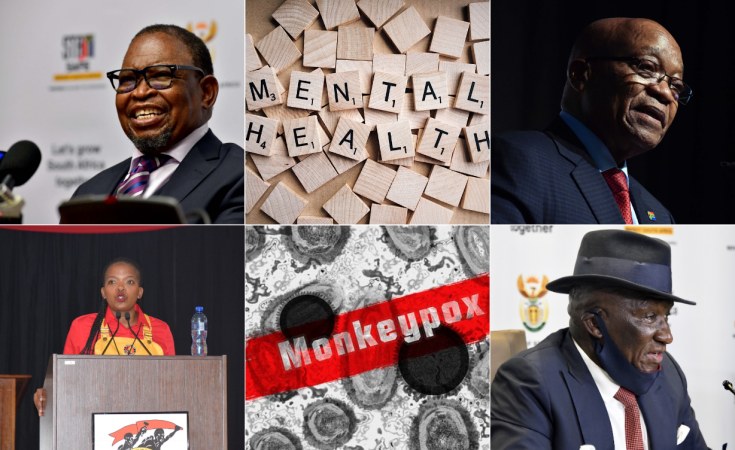 A hotel employee at the Kruger National Park has accused Finance Minister Enoch Godongwana of sexual assault, Eye Witness News reports. The minister said that he was with his wife at the time of the alleged incident, and that the allegations were baseless. The incident allegedly took place on August 9, 2022, Women's Day. The minister is yet to charged.

The deaths of students at Stellenbosch University, has turned the spotlight on mental health as some students struggle with workload and the transition from high school to tertiary education. Ky Rowe, 20, died at his Simonsberg men's residence last week, while another 20-year-old, second-year BSc chemistry student Siphokazi Ntozini was found dead at the Heemstede women's residence on July 23. SA Depression and Anxiety Group (SADAG) operations manager Vanishaa Gordhan said students face a range of factors that could impact their mental health - including moving from rural areas to cities - away from parents and teachers, a dramatic increase in workload after matric, adapting to hybrid learning and even anxiety over funding of studies. Depression and anxiety is not just among students though. SADAG says that before the Covid-19 pandemic it fielded between 600 and 700 calls a day. This doubled in the first month of the pandemic, and today the organisation deals with between 2,500 and 3,000 calls a day.

Jacob Zuma Back In Court to Fight for Medical Parole

The Supreme Court of Appeal in Bloemfontein will today hear former president Jacob Zuma's appeal against a High Court ruling which overturned his medical parole. Zuma and the Department of Correctional Services are appealing the Pretoria High Court judgment, which ruled that his release was unlawful and irrational. Zuma was released on medical parole two months into his 15-month sentence. His incarceration triggered widespread violence and looting in the KwaZulu-Natal and Gauteng provinces, costing the country billions in infrastructure damage.

Cosatu is planning a national strike against the cost of living, fuel price hikes, and load shedding for August 24, 2022. This follows on the heels of a Cosatu Cape Town protest over the high cost of living, transport costs and the escalation of crime. The union will update the media on details and arrangements regarding the national strike, on August 18, 2022. The ANC-aligned labour federation will hold a national strike on the same day as the South African Federation of Trade Unions (Saftu).

A 28-year-old South African man returning from Spain, has been infected with Monkeypox - the country's fourth case identified through laboratory testing, Health Minister Dr Joe Phaahla has announced. This is the second case reported in the Western Cape, the other two were from Gauteng and Limpopo provinces.

Cele Must Fall - Calls for Police Minister to Get the Chop

Calls for Police Minister Bheki Cele to step down, or for President Cyril Ramaphosa to fire him, are mounting. NGO, Women For Change, started a petition in which it expressed that under Cele’s leadership, Gender-Based Violence and Femicide (GBVF) and murder in the country had continued to rocket, IOL reports. The minister's recent utterances - including that a 19-year-old Krugersdorp rape survivor was "lucky" to be raped by one man, unlike the other women on the film set who were raped by several men. The NGO said the “disrespect” Cele had shown was his most shameful performance yet.