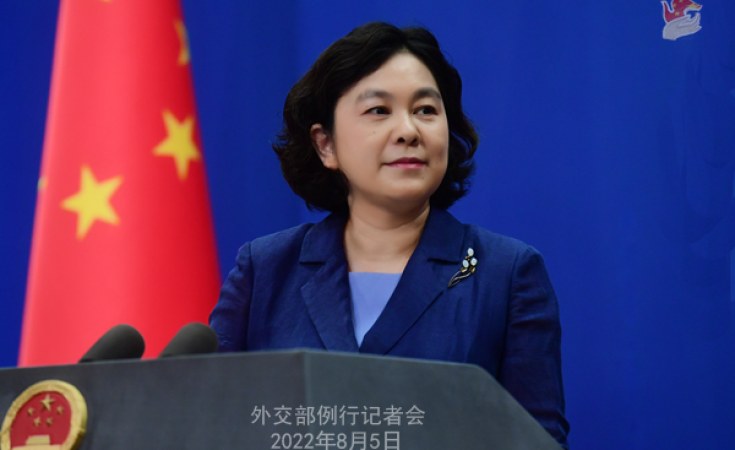 Hubei Media Group: The US Ambassador to the United Nations Linda Thomas-Greenfield began her visit to Africa on August 3, which she said was going to focus on how the US can help Uganda, Ghana and Cape Verde deal with the food crisis that has hit the continent particularly hard — not to compete with China and Russia. She added that some African countries now face “debt traps” due to their relations with China. Do you have any comment?

Hua Chunying: As China has repeatedly stressed, supporting Africa’s development is the international community’s common responsibility. The US really should spend its resources, time and energy on addressing the urgent needs of development for Africa, instead of making the suppression of other countries’ influence in Africa its African policy objective. Food security is a major issue for African countries. Taking this issue very seriously, China has put forward the cooperation initiative on global food security and has been helping African countries addressing food shortages. We have provided emergency food aid to Djibouti, Ethiopia, Somalia, and Eritrea, among others. Soon we will be providing new food aid to African countries in need. Also, we have been helping Africa train professionals, sharing technologies with Africa and building projects to help African countries boost agricultural production capacity so as to support their efforts to achieve food self-sufficiency. We welcome the US’s efforts to help Africa deal with food crisis, and we also hope the US will abide by the basic norms in international relations and not cling to the Cold War mentality, slap unilateral sanctions and undermine regional stability, which are behaviors that would only severely disrupt the international economic order and seriously harm the developing countries.

Now, about debt trap, I want to quote two latest research findings. One is a recent report released by UK-based charity Debt Justice titled The Growing Debt Crisis in Lower Income Countries and Cuts in Public Spending. According to the report, African governments owe three times more debt to Western private lenders than to China, and are charged double the interest. The accusation of a China “debt trap” is pure fabrication. The other one is a report issued by the research team from Tsinghua University titled The Trap of Financial Capital: The Impact of International Bonds on the Debt Sustainability of Developing Countries. According to this report, Western financial capital, due to its profit-driven nature, have been urging African countries to issue high-interest Eurobonds despite the economic vulnerability and weak risk resilience of developing countries. That has led to the five-fold increase in African countries’ sovereign bonds over the past decade and the rising debt pressure on African countries. Numbers don’t lie. It is quite self-evident who exactly are creating a debt trap for African countries.

Over the years, China has been an active supporter for Africa’s economic development. We have provided financial support for African countries in easing fund shortage, accelerating national development and enhancing capacity building. This has been welcomed and appreciated by African countries. Many African countries said to us that China is a true friend who genuinely helped them when things were most difficult for them. I also saw photos posted online showing the food, bridges, roads, schools, clean water and hospitals that China has brought to developing countries, including those in Africa, while some other countries sent over bombs. African countries are in the best position to comment on Africa’s cooperation with China. What makes the US think it can simply point fingers at and discredit others and drive a wedge between China and Africa? Africa needs sincere partners of cooperation instead of lecturers like the US. We hope the US will do something that is tangible and good for African countries, for the sake of its own reputation.

Tagged:
Copyright © 2022 Ministry of Foreign Affairs of the People's Republic of China. All rights reserved. Distributed by AllAfrica Global Media (allAfrica.com). To contact the copyright holder directly for corrections — or for permission to republish or make other authorized use of this material, click here.