Tunisia: In Tunisia, a New Fight for Press Freedom 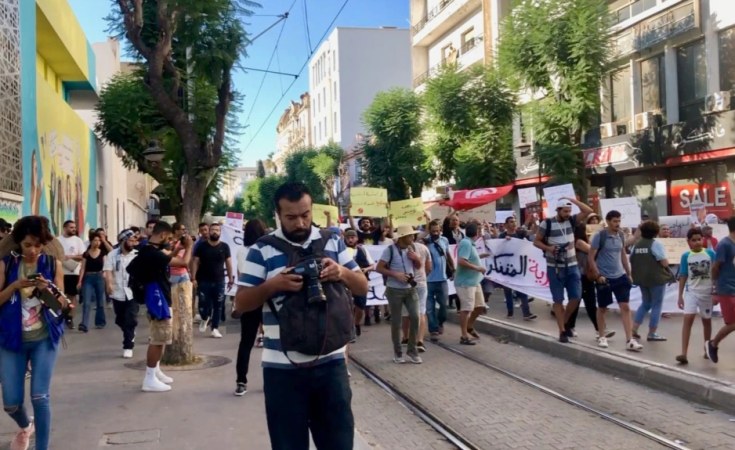 Mohamed Yassine Jelassi remembers his prison days under Tunisia's pre-revolution dictatorship, but mostly the heady ones a few years later -- as a journalist covering the country's 2011 revolt that kicked it out.

"It was a dream to live it," says Jelassi, president of the National Union of Tunisian Journalists, or SNJT, apologizing for choking up. "I really hoped Tunisia could become a developed, democratic country that guaranteed citizens' rights and liberties."

Tunisia's free and feisty press counts among the biggest wins of the historic uprising that unleashed the broader Arab Spring--even as it failed to deliver jobs and economic growth. Budding social media both covered and helped drive the spreading protests.

Now, journalists like Jelassi may be on the front lines of a frightening rollback of freedoms, media and rights groups say, under another strongman government.

The North African country lauded for creating the freest press in the Arab world tumbled more than 20 places in the latest Reporters Without Borders' press freedom index, after Tunisian President Kais Saied assumed far-reaching powers in July 2021. It now stands an underwhelming 94th out of 180--where 1 has the optimum conditions--overall.

Many fear that under the president's new constitution, which cements his powers and erases many democratic checks and balances, hard-won liberties will erode even further -- fears dismissed by Saied and his government.

"The treatment of Tunisia's media is deteriorating day by day," says Khaled Drareni, RSF's North Africa representative, who describes today's press freedom here as the "least worst" in the region.

"Unfortunately, with President Saied, we have many examples of the past," Drareni adds, referring to pre-revolution autocrat Zine el Abidine Ben Ali.

Drareni himself is no stranger to restrictions. As a journalist in neighboring Algeria, he was jailed in 2020 for covering that country's anti-government protests.

Pressures on the media are mounting here as well.

"Intimidation has become normalized," RSF wrote in its 2022 Press Freedom Index of Tunisia, describing a "new line crossed" this year, when a foreign correspondent was beaten, and others attacked as they covered a protest.

Other journalists have been detained, harassed and sentenced to prison, watchdog groups report. Two television stations critical of the president were taken off air last year for apparent licensing problems.

Tunisia's SNJT press union also accuses the government of launching smear campaigns against some reporters. And a day after Saied froze parliament and fired his prime minister in July, police stormed Qatari broadcaster Al Jazeera and shut its Tunis office.

"It's increasingly difficult to be a journalist in Tunisia," says SNJT head Jelassi, who also covers politics for online Tunisian publication Nawaat.

State television is no longer inviting opposition politicians to air their opinions, out of pressure or self-censorship, Jelassi's union found after monitoring its coverage since Saied's expanded powers.

"These were freedoms journalists had won," says Salsabil Chellali, a former journalist who now heads Human Rights Watch's Tunis office. "Today, they're fighting to keep them."

Tunisian authorities reject accusations that such freedoms are under attack.

Across all forms of media, "there's criticism," says Tunisian Ambassador to the United States Hanene Tajouri Bessassi, describing free expression and a vibrant civil society as key gains of the revolution that remain respected and intact. "People express them freely without any restrictions. The opposition as well."

"Why do you think that, at 67, I would start a career as a dictator?" the former constitutional scholar asked The New York Times last year, after his power grab.

It was a rare one-on-one press meeting with Saied, who appears to have little time for them. "This is not a press interview," the president told the Times reporter.

"He only speaks via videos on Facebook," says SNJT's Jelassi.

Still, despite the mounting reporting obstacles, Jelassi says, "the difficulties are post-revolution difficulties, within a more-or-less democratic system--so far."

Pre-revolution Tunisia was far worse, he and others say. Under its first post-independence ruler, Habib Bourguiba, television news would begin with lengthy coverage of the president's swims in the Mediterranean.

Instead, Ben Ali's government censured the internet and in effect, banned independent news outlets by controlling access to printing presses and operating licenses. He allowed some journalists to be tried in criminal court.

"During Ben Ali's time, it was a total media blackout," recalls Jelassi, who was jailed in 2006 as a student activist and reporter for a leftist opposition party and its newspaper.

"People harassed us all the time, civilian and military courts would judge us for the smallest thing," he adds. "You couldn't say anything, you couldn't protest on the streets."

But as the country's economy started to slide, so did Ben Ali's grip on power. In December 2010, the self-immolation of an impoverished vegetable vendor in neglected central Tunisia struck a chord with other struggling citizens.

In a country where few dared to speak to journalists, much less criticize the government, the first street demonstrations broke out.

Lisa Bryant / VOA
A Tunis newsstand with President Saied on the front cover of a prominent magazine.

While government-sanctioned press initially shied away from the spreading protests, opposition journalists and social media activists were covering and fueling them, via platforms like Twitter and Facebook.

"We were divided between those who joined the protests and those who reported on events," Jelassi said of his own publication. "I had a lot of friends who were arrested. I was supposed to be next."

January 14, 2011, changed that trajectory. With streets full to the brim with people chanting for his ouster, Ben Ali fled the country. Tunisia's population had won.

"The next day," Jelassi remembers, "my friends were liberated."

Good for a while

State television cameraman Yassine Bahri and his colleagues were banned from covering the protests, or Ben Ali's secret escape to Saudi Arabia.

The strictures dropped after the president's plane took off. Bahri, who was at the airport when the president flew out, covered Ben Ali's son-in-law's arrest there, minutes later.

"We had exclusive footage, aired on national TV," he says.

"Everything was good," Bahri says. For a while.

Saied is not the only politician blamed for attacking media independence.

Previous governments and parties, including the once-powerful Islamist-oriented Ennahdha, were accused of trying to manipulate coverage, partly through appointments of top executives controlling state television and newspapers.

The government of Saied's secular predecessor, Beji Caid Essebsi, was criticized for shrinking access to information and for hauling several journalists before military courts.

"We've had lots of problems with preceding governments," Jelassi says. "But there were always channels of communication.

That ended "after July 25" last year, he says, when Saied fired his prime minister and ultimately dissolved parliament.

For Yousra Chikhaoui, who works for online publication Hakaek, press freedom today is a "relative" concept.

"We can do specific topics, like reports and interviews," she says, "but when it comes to investigations, journalists have a lot of problems."

Chikhaoui says she was slapped by police last month covering a demonstration against Saied's constitution, which ended in tear gas and scuffles.

"They hit me with their hands," she says of her assailants, whom she claims also included security forces in civilian clothes. "I lost consciousness."

She'll be back to cover the next demonstrations.

"It's too late to muzzle the press again," Chikhaoui says. "We'll continue to speak out. We won't let up."