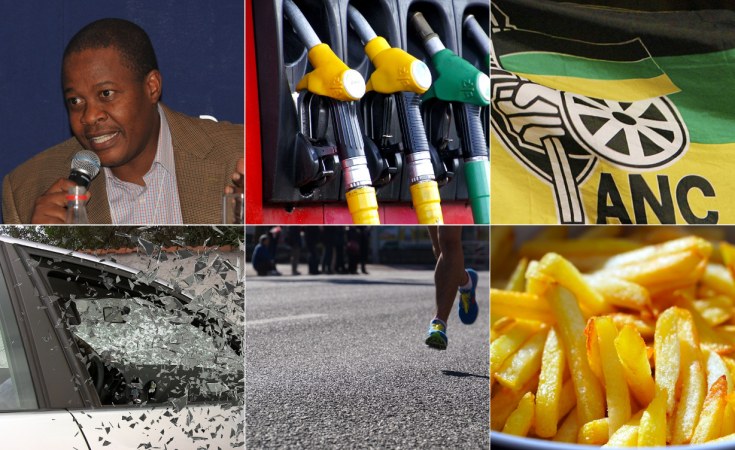 The four former Transnet executives arrested today - former Transnet chief executive officer Brian Molefe and Anoj Singh, the parastatal's former finance boss, were arrested today in connection with a loan of R93 million for the procurement of 1,064 locomotives in 2015. Alongside Molefe and Singh were two other former Transnet executives Niven Pillay, and chartered accountant and director of several companies Litha Mangaliso Nyhonyha and Regiments Capital - a Gupta-owned firm - which is accused number 10 in the case, Eye Witness News reports that the four will appear in court again on October 14, 2022 and had to surrender their passports. Former Transnet CEO Siyabonga Gama, former Transet acting group CFO Garry Pita, and former group treasurer Phetolo Ramosebudi also appeared at the Palm Ridge Specialised Crimes Court today.

Petrol Price Coming Down Though Less Than Expected

A little good news for consumers is that according to the latest data from the Central Energy Fund, the price of 95 unleaded petrol is expected to fall by around R2.28 a litre in the first week of September. The price of 93 petrol could drop by around R2.12 a litre. Diesel could be reduced by more than a rand a litre.

The African National Congress despite several setbacks that the party has experienced and its dismal showing at the municipal elections in 2021, still stand a chance of coming out tops in the general elections in 2024, according to and independent elections analyst Dawie Scholtz, Eye Witness News reports. Scholtz said that p oll data shows that the ANC is likely to get over 50%, while the Democratic Alliance was likely to get 21% and the Economic Freedom Fighters could garner 12%.

Road Accident Fund's New Rule May Leave Many Out of Pocket

The Road Accident Fund (RAF) is being hauled to court over a contentious new policy to stop paying out for past medical expenses covered by medical aid. The controversial move was announced in an internal communique published earlier this month, which states that all RAF offices must now reject claims for past medical expenses - which were covered by medical aid on the grounds that these claimants "sustained no loss or incurred any expenses". A claimant's attorney explained to Eye Witness News that a claimant has a contractual obligation to reimburse his/her medical aid for past medical expenses covered or paid by them, once he/she is successful with an RAF claim. Discovery Health is also challenging the RAF action.

Tete Dijana has won the men's race in the 95th Comrades Marathon that took place yesterday August 28, in the "down run" from Pietermaritzburg to Durban. A security guard from North West province, Dijana, 34, came 50th in the Comrades in 2019 - the last one before Covid-19 stopped the event for two years. Edward Mothibi, who won in 2019, secured second place and Dan Moselakwe third place. The women's race was won by Russian Alexandra Morozova, who approached the courts at the eleventh-hour, for permission to run after the Comrade's Marathon Committee withdrew her entry. South African ultra-runner Gerda Steyn did not defend her title as she is preparing for the New York Marathon that will be run on November 6, 2022.

Price of Fries Going Up

Heavy import tariffs on frozen French fries came into effect in July, imposed by the International Trade Administration Commission (ITAC) in an alleged attempt to protect the local industry from "dumping" or being undercut by artificially lowered prices. These include duties on frozen chips from Belgium of up to 23.06 % and up to 104.52 % from the Netherlands, while German suppliers have been hardest hit with new duties of 181.05 %. This means that the fries sold to consumers will become pricier. Maybe it's time to cut down on South Africa's favourite fast food - slap chips!