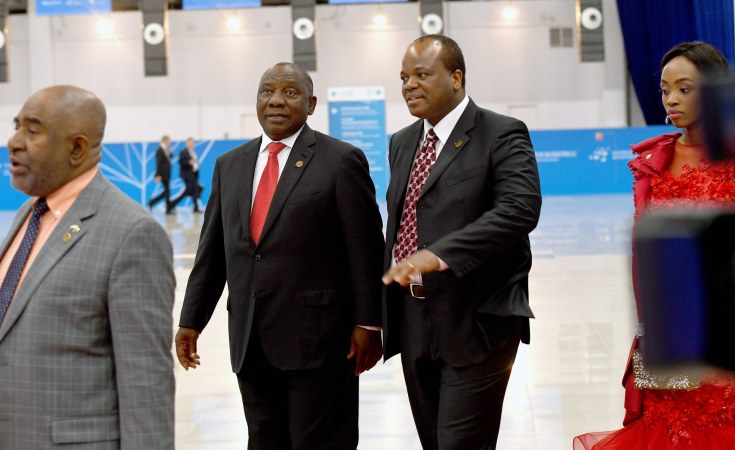 GCIS / Flickr (CC BY-ND 2.0)
South African President Cyril Ramaphosa and King Mswati III of eSwatini (centre of picture, with Ramaphosa on the left) arrive at an official dinner for Heads of State and Government at the Russia-Africa Summit in Sochi in 2019.
Daily Maverick (Johannesburg)
analysis By Peter Fabricius

Meanwhile -- this is, after all, Eswatini -- a South African lawyer representing two jailed pro-democracy Swazi MPs has been expelled for allegedly urging maidens not to attend the annual Reed Dance.

It's been almost a year since Swazi King Mswati III met President Cyril Ramaphosa in Eswatini and agreed to launch a national dialogue to address the kingdom's growing political crisis.

Eswatini's political opposition, under the umbrella of The Multistakeholders Forum (MSF) has mildly rebuked SADC leaders for "reinventing the wheel" by agreeing to the new summit and fact-finding mission. It has accused Mswati of dragging his feet and has warned SADC leaders not to be hoodwinked by the king into believing the crisis in Eswatini is a security rather than a democracy issue. They insist that the growing insecurity in the country is the result of Mswati denying democracy.

The Swazi government is in the meantime showing no signs...