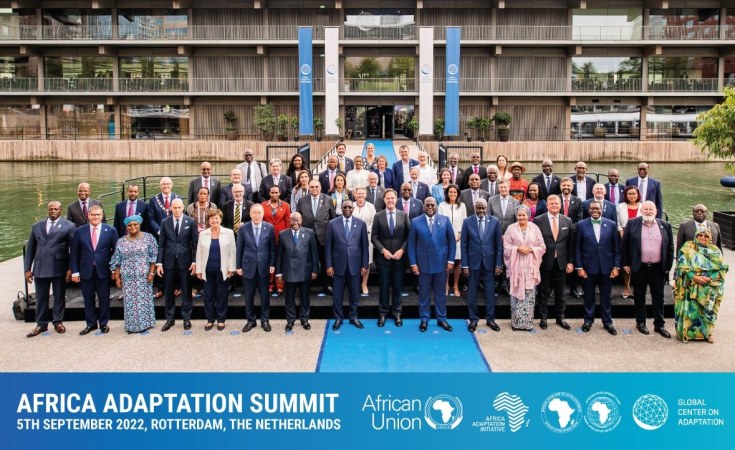 When African leaders gathered in the Dutch city of Rotterdam this week to find solutions and money for climate change adaptation, only one European head of state joined them in person.

Senegalese President Macky Sall said richer nations' failure to come to the table and discuss how to pay for climate damage they have caused was disappointing - an issue set to be high on the agenda in upcoming U.N. climate talks in November in Egypt.

"I cannot help but note with some bitterness the absence of leaders from the industrial world," he said at the Africa Adaptation Summit, adding he had thought the meeting being held in Europe would make it "easier" for them to attend.

"They are the main polluters on this planet, and they are the ones who should be financing adaptation," Sall added.

A lack of climate finance will be among the main topics at U.N. COP27 climate talks in Sharm el-Sheikh, as African leaders demand rich nations support their need to adapt to growing climate risks.

Africa has about a fifth of the world's population, but produces less than 3% of global carbon dioxide emissions, the major driver of climate change, according to the International Energy Agency.

Despite this, the continent is disproportionately affected by climate impacts like droughts and floods, underlining the need for countries to invest in projects like updating infrastructure and making agriculture more resilient.

At last year's U.N. climate talks in Glasgow, developed nations pledged to double funding for adaptation projects in developing countries to about $40 billion per year by 2025.

Whether that will materialise remains unclear, with the $100 billion per year promised to vulnerable states by 2020 to adapt to climate change and green their energy systems still unmet.

Meanwhile, the African Development Bank and Global Center on Adaptation aim to raise $25 billion for their Africa Adaptation Acceleration Program (AAAP) by 2025 to accelerate and scale up climate adaptation efforts across the continent.

The bank has committed half the total for the African-led scheme, and is seeking investment from developed nations. Pledges of $55 million towards the AAAP from Britain, Norway, France, and Denmark were announced at the summit on Monday.

Ghana's President Nana Akufo-Addo said he would push richer nations at the COP talks to contribute to the AAAP and deliver on climate funding promises, including the longstanding $100-billion pledge.

"With the world in flames and under flood waters, the eyes of people everywhere will be on the decision makers at COP27," Akufo-Addo, who also chairs the Climate Vulnerable Forum group of countries, told the Africa Adaptation Summit.

"If we want our continent to thrive, we have to adapt to climate change - and to achieve this, adaptation financing needs to start flowing at scale."

The level of finance needed for Africa to prepare for worsening climate impacts and move to greener economies is so far well beyond current funding available.

African countries are getting just 12% of the $250 billion per year they need to implement their climate plans, according to an analysis released last month by the Climate Policy Initiative (CPI), a California-based non-profit.

The continent is striking a better balance than other regions between financing emissions cuts and climate change adaptation, said Chavi Meattle, a senior analyst at CPI.

But its current efforts to adapt are "still anaemic", she told the Thomson Reuters Foundation in a phone interview.

"You don't just want a hodge-podge of different adaptation initiatives that don't speak to an overall strategy," she said.

As leaders prepare to discuss a climate finance package for developing nations at COP27, Wilkinson believes the increase of extreme climate events in rich nations - from heatwaves to wildfires - is making them focus more on adaptation too.

"That's putting the adaptation agenda much more firmly up there as a priority for national governments," she said.

(Reporting by Jack Graham; Editing by Sonia Elks. The Thomson Reuters Foundation is the charitable arm of Thomson Reuters, and covers the lives of people around the world who struggle to live freely or fairly. Visit http://news.trust.org)