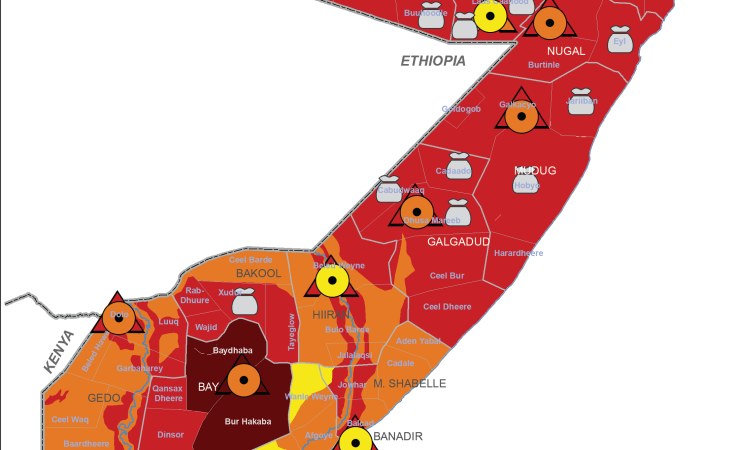 IPC
About 6.7 million people across Somalia are expected to face high levels of acute food insecurity between October and December 2022. The darker the shading on this map, the more serious the crisis.
allAfrica.com
By Peter Kenny

Geneva — The number of Somalia's youngest children – those aged under five – expected to suffer severe acute malnutrition has leapt from nearly 400,000 to more than half a million, the United Nations Children's Fund (Unicef) warns.

James Elder, a Unicef spokesperson, said at a UN news conference in Geneva on Tuesday that the number of children aged between six and 59 months at risk had increased by a third since June, from 386,000 to 513,000.

Parts of Africa face famine conditions not seen in the last 40 years. UNICEF, the World Food Programme (WFP) and the Food and Agriculture Organization (FAO) have made a call for immediate funding to help vulnerable communities hit by successive droughts, high food prices and conflict.

They have stressed that the emergency shows no signs of letting up.

Elder said children are already dying, and Unicef's partners report that some stabilization centres are full, with critically-ill children are receiving treatment on floors.

A pending nightmare we have not seen this century

During the famine of 2011, 340,000 children required treatment for severe acute malnutrition, Elder told journalists in Geneva. With more than half a million "now facing preventable death... it's a pending nightmare we have not seen this century."

Elder explained that severely malnourished children are up to 11 times more likely to die of causes such as diarrhoea and measles than well-nourished boys and girls.

According to the FAO, some 6.7 million people across Somalia will likely endure high levels of acute food insecurity between October and December this year. The number includes more than 300,000 who have been left "empty-handed" by what it categorises as a "triple emergency".

In pastoral communities where herders have been desperately searching for pasture, "they are now watching their livestock drop dead like flies." said Etienne Peterschmitt, FAO representative in Somalia.

The perilous situation for families in Baidoa and Burhakaba districts and those forced from their homes by hunger in Baidoa town in the Bay region of southern Somalia is especially concerning, Peterschmitt said.