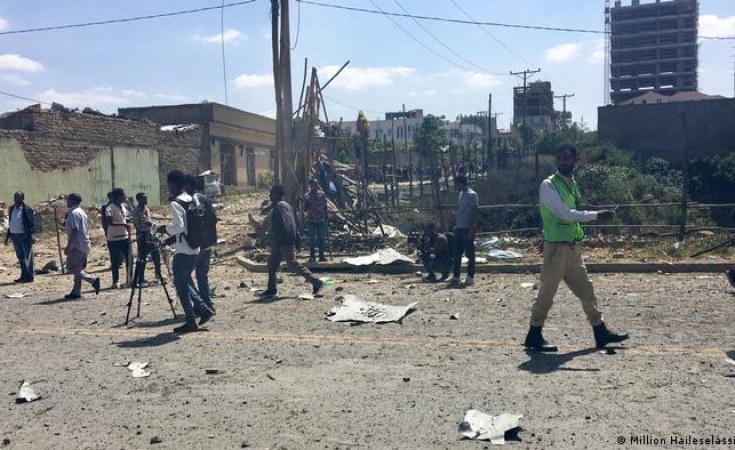 Nairobi — Reports that Eritrea is mass-mobilizing reserve troops has raised international concerns that the reignited war in Ethiopia's Tigray region could quickly escalate.

A Tigrayan forces spokesman said Tuesday that Eritrean troops have launched a "full-scale offensive" supported by Ethiopian forces. Eritrean and Ethiopian officials have yet to comment on the reports or a series of airstrikes this month that hospital officials say killed Tigrayan civilians.

In a tweet, a spokesman for the Tigray People's Liberation Front said Eritrean forces have launched a full-scale attack in parts of the Tigray region with the help of forces from the Amhara and Afar regions.

Getachew Reda said TPLF forces were defending their positions against their enemies.

The U.S. special envoy for the Horn of Africa, Mike Hammer, ended his visit to Ethiopia last week, the third visit since he was appointed in June. In a news briefing Tuesday, Hammer said Eritrea must stop interfering with its neighbor's internal affairs.

"We've been tracking Eritrean troop movement across the border, they are extremely concerning and we condemn it. All external foreign actors should respect Ethiopia's territorial integrity and avoid fueling the conflict. We couldn't be any clearer. We've said this repeatedly," Hammer said. "We will encourage those who might be able to communicate directly with Asmara that this is of extreme concern and must stop."

Eritrea supported the Ethiopian government of Prime Minister Abiy Ahmed when the war between Ethiopia and the TPLF broke out in November 2020. Tigray officials accuse Eritrea of committing rights violations against its people, a claim it denies.

Hassan Khannenje, head of the Horn Institute for Strategic Studies, said Eritrea's mobilization of troops is guided by the government's fear of conflict spreading into its territory.

"There is a sense that Eritrea perhaps expects some kind of incursions or attack from TPLF and so, in part, is an attempt to preempt that by increasing its own readiness as well as being ready to offer whatever support perhaps that Prime Minister Abiy Ahmed may need," Khannenje said.

A report released Monday by the United Nations Human Rights Council accused all sides of the Tigray conflict of crimes against humanity. It warned that resuming the conflict increased the risk of more crimes against the population.

According to the report, the human rights researchers said there were reasonable grounds to believe that the Addis Ababa government and its allied regional state administrations have committed and continue to commit crimes against humanity such as ethnic persecution and other inhumane acts.

A five-month cease-fire in the Tigray conflict came to an end last month. Khannenje said the return of Eritrean troops to Tigray will complicate the peace efforts ahead.

"The potential entry of Eritrea into that theater complicates the entire equation when it comes to the search for peace," Khannenje said. "And so it's going to be important that the players, not just within Ethiopia but especially those who are trying to help the parties, come to a negotiated agreement that step the efforts in ensuring that this kind of escalation doesn't take place and that Eritrea is limited with regard to their engagement in Ethiopia."

Hammer said the Ethiopian government and Tigray regional administration must resolve their differences through dialogue.

"What is important here is that the parties recognize the United States is trying to serve their best interest, the best interest of Ethiopia, which is again to begin a process that allows them through dialogue to resolve outstanding complex and difficult political issues that the fighting is not going to yield victory for either side," Hammer said.

Tens of thousands of people have been killed and millions displaced in the Afar, Amhara and Tigray regions by the war.