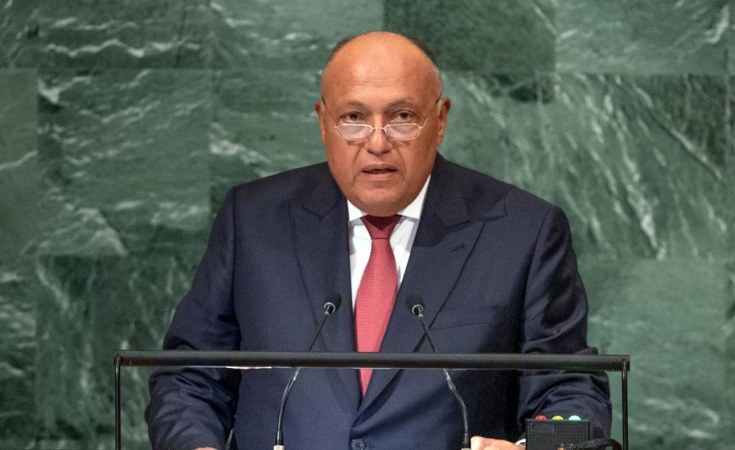 Egypt, which is hosting the 2022 UN Climate Conference this November, is calling on the international community to act on climate pledges made to developing countries, the country's Minister for Foreign Affairs, declared on Saturday.

In his speech to the high-level segment of the UN General Assembly, Sameh Hassan Shoukry Selim said that the world is at a delicate historical moment of increased polarization, at which serious action, and a commitment to multilateralism, are needed.

The fault lies, he said, not in the UN system, but in the failure of Member States to respect the Organization. He called for States to reinvigorate and reform it, and urged them not to leave the process incomplete, so the UN can better respond to challenges and meet the goals of the people.

On the Ukrainian invasion of Russia, Mr. Selim warned that this has exacerbated the crisis caused by the COVID-19 pandemic, which led to an increased burden for developing countries, especial in terms of growing public deficits.

There is a need, he said, for developed countries to convert the debt they hold into joint investment projects, which would "create more job opportunities and contribute to positive economic growth."

There must be an international consensus, said Mr. Selim, without threats to countries, or the undermining of sovereignty. Current challenges, he continued, threaten the very notion of nation-states, leading to a lack of respect, and the weakening of State entities, which allows non-State terrorists to control the destiny of nations.

The food crisis faced by Africa, claimed Mr. Selim, is the consequences of many years in which there has been a failure to hit the targets of the Sustainable Development Goals (SDGs), particularly those related to hunger and food security.

With one in five Africans at risk of hunger, and the Continent a net importer of food, declared Mr. Selim, the crisis needs to be addressed through an international strategy that tackles its root causes.

Solutions include the implementation of sustainable farming and food systems that meet the needs of people in food importing African countries whose products, he declared, must allowed to be a part of the global supply chain without hindrance.

Mr. Selim offered Egypt's support in the creation of an international hub in the country, for the storing, supplying, and trading of grain, to guarantee global food security.

Developing countries 'most deserving of our support'

Turning to the climate crisis, Mr. Selim noted that Egypt will take on the presidency of the COP27 UN Climate Conference, which will be held in the resort town of Sharm El-Sheikh this November.

He appealed to all members of the international community to act on the pledges and commitments of support for developing countries, to cope with the devastation impacts of the emergency. "They are the most deserving of our support," he said.

The Minister looked forward to the Conference reaching outcomes that will contribute to a reduction in emissions, and enhanced mitigation, adaptation, and loss and damage commitments. He reminded the audience that finance for adaptation needs to be doubled, that the $100 billion promised for climate finance annually must be duly delivered, and that there must be a just transition to renewable energy.

The implementation of the 2015 Paris climate accord would demonstrate, said Mr. Selim, that climate action remains an important priority on the global scene, despite the challenges facing the world.

On water security, Mr. Selim described the issue as one of those challenges, especially for Middle East and African countries. Many of those countries, he explained, are dry and arid, but the grave human suffering resulting from water shortages, he claimed, is often due to a lack of respect for international law, with some countries monopolizing water resources, to the detriment of nations downstream.

With regards to the Nile, Mr. Selima declared that, whilst Egypt recognizes the right of the Ethiopian people to development, this will never mean that the country lets go of the right of Egyptians to the river's water, which has, he said, always been part of Egypt's history.

A legally binding agreement regarding the functioning of the Grand Ethiopian Renaissance Dam must be reached, said the Minister, in line with an agreement reached by Egypt, Ethiopia, and Sudan in 2015, and a 2021 Security Council resolution. He called on all three States to respect their obligations in deeds, not word.