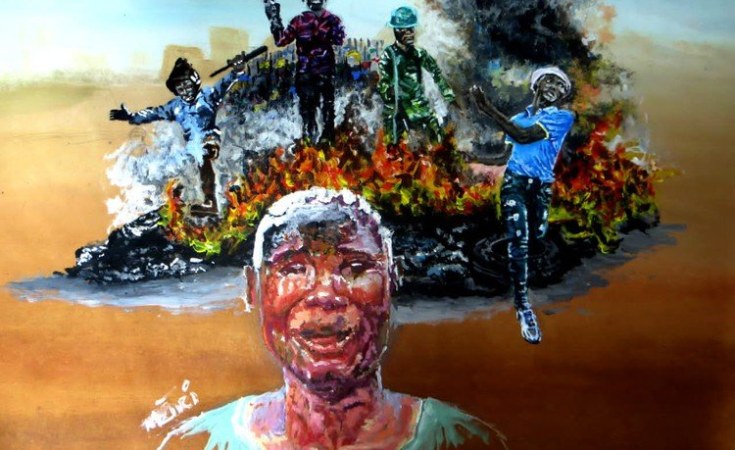 Nokulunga Majola/GroundUp
Azuri Muhuli’s painting of trader Amina Rugondera, who was chased from her stall and threatened with violence in Durban this year.
allAfrica.com
By Jerry Chifamba

Harare — Cross-border immigration is frequently the focus of divisive and passionate debate in the host nation and has emerged as the subject of contentious and emotional debate in many countries. A disturbing trend globally is that some political groups tend to blame and scapegoat immigrants for socio-economic problems like crime, health crises, unemployment, and poverty.

"This expression of discontent is not supported by facts, but rather by fear and hostility against those who are not from our country, but come from other countries, " says Anne Lammila, the Ambassador of Finland to South Africa while addressing a hybrid seminar co-hosted by the Institute for Security Studies (ISS) and the University of Johannesburg's Institute for the Future of Knowledge (iFK).

However, it is not exclusively in South Africa that immigrants are blamed for socioeconomic problems. "This was the case in the United States of America with former president Donald Trump and especially Mexican immigrants, in Turkey with the Recep Tayyip Erdogan-led Turkish government and Syrian refugees, as well as in England and France," said Lammila.

During the seminar, the ISS released a report that aims to debunk the fallacy that immigrants in South Africa are the cause of many of the country's problems. Scapegoating in South Africa Busting the Myths About Immigrants, does shed light on the 'attitudinal orientation of hostility against non-nationals in a given population' which is by definition, xenophobia. With many of South Africa's socioeconomic difficulties increasingly being blamed on immigrants, this couldn't have come at a better time.

The false narratives are frequently expressed by politicians and government officials, at a time South Africa faces many challenges. Most of South Africa's youth are unemployed. In the first quarter of 2022, the southern African country saw about 68 murders on average day, says ISS's Lizette Lancaster.

More than half of the country's population lives in poverty. At least 11,8 million people are hungry and 2,5 million experience hunger every day. The country has a Gini coefficient of 0.65, making it one of the most unequal countries in the world.

Looking at unemployment, according to the quarterly labour force survey, for the first quarter of 2022, the unemployment rate was almost 64% for people aged between 24 and just over 42% for those aged 25 to 34. The current official national rate is almost 35%. So poverty, inequality and unemployment disproportionately affect black South Africans, especially women. There are no quick fixes to these problems - but it seems politicians across the spectrum are of the belief that turning on immigrants is a silver bullet.

Immigrants have also been accused of being the cause of poor service delivery with regards of public public housing, health and schooling, as they use the services which some people believe should be reserved for citizens of South Africa. They are of the idea that if foreign born immigrants were removed from the country, citizens would have more jobs, less crime, and better service delivery.

But as the report shows, the assumptions that foreign immigrants are the cause of these problems, or contribute to worsening conditions for locals are rarely interrogated to determine whether they are supported by evidence.

What does the evidence say?

According to the Scapegoating in South Africa Busting the myths about immigrants report, South African socioeconomic problems are not caused by immigrants but by poor governance and corruption. Corruption and other illicit activities deplete funds that are available for critical areas such as housing, social grants and public health.

"Just to flush out a bit during the peak of state capture years, South Africa lost close to R1.5 trillion between 2014 and 2019. If you're looking at municipalities and local governance, five out of six of the most recent Auditor General's reports indicate that there is a very gloomy picture around service delivery and local governance. Since 2017, less than 20% of South African municipalities have received clean audits. The worst consistent performers have been the Free State, and North West provinces which have failed to produce a single municipality with a clean audit," says Anthony Kaziboni, Head of Research at the Institute for the Future of Knowledge.

This level of corruption along with other illicit activities deplete funds that are available for critical areas such as housing, social grants and public health.

There is a notion that South Africa is swamped with immigrants and is overwhelmed. Some estimates range between 2.5 million to about 5 million. Leader of the Patriotic Alliance political party, Gayton Mckenzie, who is now known for speaking out against immigrants once tweeted that there are 10 million undocumented immigrants in the country, which is a lie.

In 2019, the Human Sciences Research Council set the Social Attitudes Survey, which indicated that over a third of the population in South Africa, thinks that the population of foreign nationals in the country exceeds 25 million persons, said Diego Iturralde, the Chief Director of Demography and Population Statistics at Statistics South Africa. That would mean almost one in two people in South Africa would be a foreign national, a perception that's beyond ridiculous.

According to Stats SA, there are about 3.95 million immigrants in South Africa to account for about 6.5% of the country's population of over 60 million. This is in line also with the United Nations statistics.

Looking at this, rather, there is evidence that the opposite is true. Immigrants often create employment for South Africans. According to a 2018 World Bank study, based on data collected between 1996 and 2011, in South Africa, one immigrant worker generates approximately two jobs for locals.

"Immigrants are generally more likely to be self-employed, and employ South Africans. Moreover, a little known fact is that rather than undermining the economy, immigrants contribute an estimated 9% of the country's GDP. They effectively contribute to public healthcare that some are being turned away from. Immigrants also have a positive net impact on the government's fiscus which is attributed to the fact that they generally pay more income in value added taxes," says Kaziboni.

Immigrants cause high levels of crime

According to data from the South African Social Attitudes Survey, the majority of Africans do feel that immigrants are to blame for the nation's crime. However, when asked who commits crime in the areas in their communities, Kaziboni says most people will say it's locals.

"For example, between 2011 to 2017, the national victims of crime survey showed that between 5.7 to 6.7% of households stated that policing seems to target immigrants, for example, Operation Fiela.

So there is no statistical relationship between international migration in South Africa and crime. There is no evidence that most immigrants commit crime or are responsible for most crimes in the country. Looking at some recent statistics that were presented around immigrants. We know that 2.3% of the total inmate population in prisons are immigrants and proportionately this is smaller than the number of migrants which is at 6.5%," said Kaziboni.

Surprisingly, at addressing a council of mayors conference that was held in the Gqeberha, Police Minister Bheki Cele debunked this notion too, as he presented the disconcerting picture indicating that there were more than half a million South Africans in prisons and 18,000 of the 544,000 inmates in South African prisons were immigrants which is below 3%. Cele further noted that South African men raped 10,000 women in the first quarter of 2022 and 60% of the victims were abused in their homes.

Immigrants are in South Africa illegally

The Department of Home Affairs management issues or policy changes affect how people will renew their visas, says Kaziboni adding that often, immigrants enter into the country with regular status. This, he says, can be attributed as a result to departmental dysfunctionality. "As we know, the Home Affairs is plagued with corruption and the minister is working tirelessly to deal with that decisively," he said.

With immigrants accounting for about 6.5% of the population, it is statistically impossible for them to be responsible for the healthcare systems failings.

"At a provincial and national level statistics on the total number for example of babies born to undocumented migrants are not publicly available. So there is there are issues around the kinds of statistics that are generated, you know, regarding access to health care, and these continued claims of migrants flooding South Africa's public health care facilities dominate the national discourse and promote medical xenophobia."

Whilst not dismissing the reality faced by many South Africans, poverty, inequality, crime and unemployment, there's need to understand what the figures are saying.

What are the solutions?

The study has recommended Statistics South Africa make population data easily accessible and understandable to government departments and ministries, political parties and the general public to avoid assumptions on the number of migrants in South Africa.

The study also calls upon organisations across all sectors to commit to tackling xenophobia as they would racism or sexism. Their representatives should use credible, accurate and reliable population data when addressing their respective constituencies about immigrants and immigration.

More than 936 violent xenophobic incidents have been reported in South Africa since the country's transition to democracy in 1994. These have led to about 630 deaths, 123,700 people being displaced, and approximately 4,850 shops being looted, according to the joint study. The largest xenophobic incidents, which adversely impacted thousands of individuals and garnered international attention, took place in 2008 and 2015.

"In many countries, migrants are encouraged to come, to set up small businesses, grow them and to create employment, and in fact they have actually been called in many countries, unsung heroes. Many South Africans, particularly in poorer areas, rent out their properties, which becomes a vital source of income for households," says Jonathan Crush, an international migration expert and founder of the Southern African Migration Programme.

5 Xenophobic Myths About Immigrants in South Africa Debunked By Researchers