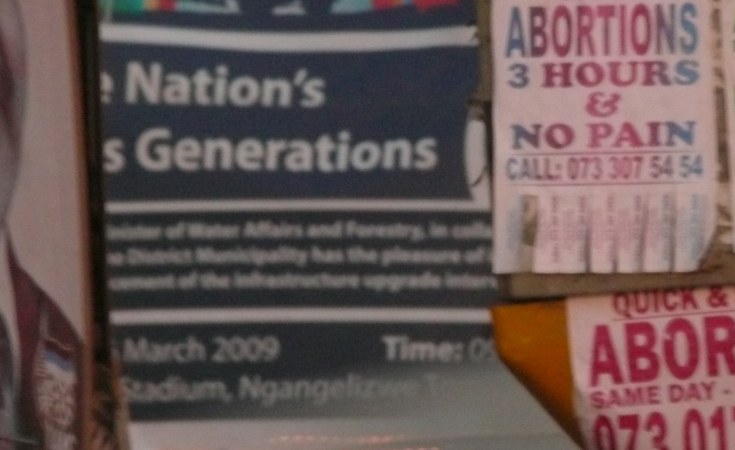 Ground-breaking research into accessing safe abortion services in South Africa has revealed that telemedicine abortion is safe and effective, and a viable alternative to the conventional medical procedure, especially for women in under-resourced settings.

Scientists drew these and other conclusions after completing the world's first randomised control trial (RCT) into the efficacy of telemedicine abortion - a medication-based abortion that generally relies on a two-drug combination and is aimed at women in their first trimester. The study was a joint collaboration between academics at the University of Cape Town (UCT) and the Karolinska Institutet - a research-led medical university in Stockholm, Sweden.

According to Dr Margit Endler, a consultant in obstetrics and gynaecology at Karolinska Institutet and an adjunct senior researcher in UCT's School of Public Health and Family Medicine, abortion is an essential part of a woman's reproductive rights. Yet, access to abortions remain restricted in South Africa despite the country's liberal abortion laws. As a result, she said researchers aimed to establish whether the medication-based abortion option, which includes an online consultation and a simplified physical exam, would be considered as an effective, safe and acceptable alternative to medical abortions. Dr Endler said the trial specifically targeted women in rural communities where ultrasound scans were not easily accessible in clinics, or where the service was not in reach.

"This research opens up new avenues of access to care, especially for women who have [limited] access to healthcare."

"We are very proud because this is the first RCT performed on telemedicine abortion and is also just one of a handful of studies that investigates telemedicine abortion in low-resourced settings. We are thrilled with the results, which show that this model for abortion care is safe and effective when compared to the standard care option. This research opens up new avenues of access to care, especially for women who have [limited] access to healthcare," Endler said.

Approximately 900 pregnant women who needed access to medical abortions at public health facilities in Cape Town participated in the clinical trial. The first group of participants (450) were randomly selected for the standard care option and received an in-person consultation with a healthcare worker (HCW). The HCW performed an ultrasound to assess the stage of the pregnancy and later facilitated the abortion in the clinic. The remainder of participants (450) were selected to participate in the telemedicine abortion model intervention. They were required to complete an online questionnaire that was reviewed by a doctor, and once the patient was approved to proceed with terminating the pregnancy, she received four separate messages via Facebook Messenger detailing what to do at home. These messages also included guidelines on what to expect after taking both pills and highlighted the red flags patients needed to look out for. Thereafter, the patient was required to visit the clinic where a nurse palpated her uterus in preparation for the abortion and supplied both abortion pills to take home.

"We found that this asynchronous online consultation and instruction for medical abortion, with uterine palpation as the only in-person component, followed by home self-medication, was non-inferior to standard care. It also did not affect safety, adherence or satisfaction," Endler said.

The realities of abortion in South Africa

Endler's paper, titled "A telemedicine model for abortion in South Africa: a randomised, controlled, non-inferiority trial" was published in Lancet in August 2022. The research was conducted against the backdrop of some startling findings on abortions. Even though the procedure is legally performed at public healthcare facilities in the country, half of all abortions in South Africa are estimated to be performed by unlicenced providers. For many women, using formal services remains a no-go as a result of abortion-related stigma.

"Unsafe abortion contributes to preventable deaths during pregnancy, and delays in access have resulted in a high proportion of second trimester abortions."

Currently, about 8% of global deaths during pregnancy occur as a consequence of unsafe abortions. In light of this alarming statistic, the World Health Organization now recommends several steps to "demedicalise" abortion, which includes researching and performing telemedicine abortions as an alternative and safe abortion option. And Endler agrees. She stressed the urgent need for access to safe abortion services in the country to reduce the rate of informal abortions and improve the experience for women.

"Unsafe abortion contributes to preventable deaths during pregnancy, and delays in access have resulted in a high proportion of second trimester abortions. Yet, all or some of the components of a medical abortion can be done remotely by the woman herself, guided by a qualified provider using telecommunication," the research paper indicated.

Abortion care consists of several fundamental components: counselling and providing the necessary information the patient needs; screening for eligibility, which includes an assessment on the duration of the pregnancy; providing a set of clear guidelines on how to perform the abortion at home; issuing the medication and conducting a follow-up examination post-procedure in a clinic. Because some of these components can easily be performed remotely, Endler said South Africa should prioritise its call for telemedicine abortion.

"This model could be used at clinic sites without access to ultrasound scans. It could also be used in resource-constrained settings where abortion is legally restricted," she said.

"We sincerely hope that this research can add to the existing momentum that's already been created to expand telehealth as a way to increase access to abortion in South Africa."

The benefits of adopting this model also extend beyond easy and safe access to abortion care. Because most phases of the procedure are conducted online, she said the process is also simple and hassle-free. Further, it allows women to start the process in the comfort of their home or in an environment that they've chosen themselves. Interestingly, she said most women who participated in the research study reported that they preferred the telemedicine model of care for abortions.

"This shows that online consultation and instruction is something women understand and are able to use confidently. We sincerely hope that this research can add to the existing momentum that's already been created to expand telehealth as a way to increase access to abortion in South Africa," Endler said.

Tagged:
Copyright © 2022 University of Cape Town. All rights reserved. Distributed by AllAfrica Global Media (allAfrica.com). To contact the copyright holder directly for corrections — or for permission to republish or make other authorized use of this material, click here.