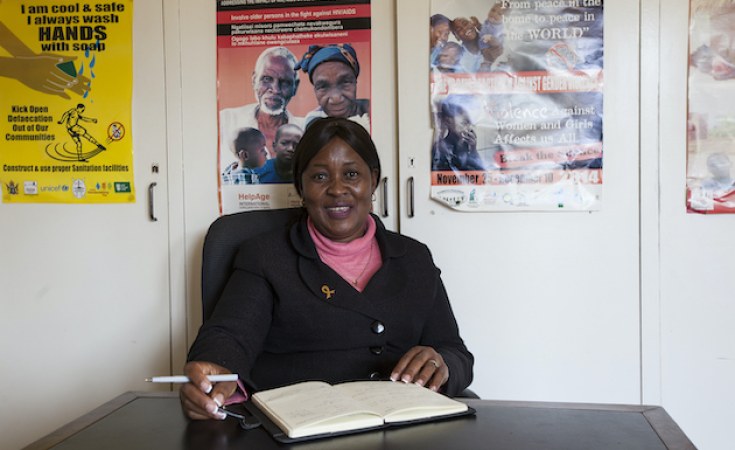 Jeffrey Moyo / IPS
HelpAge Zimbabwe director Priscilla Gavi is concerned about the elder abuse in Zimbabwe, especially as many are reliant on their families for support.
Inter Press Service
By Jeffrey Moyo

At his house in Mabvuku, a high-density suburb in Harare, the Zimbabwean capital, 86-year-old Tinago Murape claims his grandchildren starve him.

Not only that, but Murape, who now walks with the support of a walking stick, said his three grandchildren - grown-up men with their wives and children living in his house, accuse him of bewitching them.

Murape's wife, Sekai, born in 1941, died two years ago after she contracted COVID-19.

All of his three children, two sons and a daughter, succumbed to AIDS decades ago, Murape told IPS without beating about the bush as he tapped on the ground with his walking stick.

Faced with joblessness and leading lives as domestic part-time workers in the affluent suburbs of Harare, his grandchildren strongly believe their grandfather cast spells on them, resulting in them failing to get formal jobs even though they are educated.

Now the grandsons, and their wives, have reportedly slapped Murape with sanctions - denying him food as a way of punishing him for causing their economic misery, according to him.

The grandchildren have vehemently denied the accusations.

"That's not true. It's old age pushing him to think like that," one of the grandchildren told IPS.

Yet, for Murape, the abuse has gone on for years as he claims well-wishers and neighbours have often fed and clothed him.

The three grandsons, 27-year-old Richard, 29-year-old Benito and 32-year-old Tamai Murape, have never been formally employed after they completed their technical courses at Harare Polytechnic College.

According to the Zimbabwe Congress of Trade Unions, 90 percent of Zimbabweans are unemployed.

Murape's grandsons are part of the country's unemployed, although they blame witchcraft, which they pin on their aged grandfather, for their joblessness.

In some instances, said Gavi, older persons are set upon by community members with beatings that may be fatal or leave them with disabilities or are burnt in their houses.

But Murape has said he has learnt to make do with the abuse.

"Sometimes they shut me out of my own house on top of denying me food, knowing I have no source of income and well-wishers have become my saviours every day," Murape told IPS.

In fact, with many aged Zimbabwean citizens like Murape putting up with abuse, the abuse of the country's senior citizens has turned into a growing trend.

In 2021 alone, police in Zimbabwe claimed they handled 900 cases countrywide related to the abuse of aged persons.

Like Murape, many aged persons in Zimbabwe taken care of by relatives claim they have become victims of physical and emotional abuse, with some claiming even to have been sexually abused.

Aged rape victims are many, like 76-year-old Agness Murambiwa in Harare, who claimed her 22-year-old grandson raped her before he fled to neighbouring South Africa earlier this year.

Gavi said aged persons are not spared from sexual abuse.

"Cases of rape of older women by much younger men are increasing in parts of Zimbabwe. In some instances, these arise from the mistaken notion that having sex with an older woman can cure one of terminal illnesses," Gavi told IPS.

But the wounds remain for Zimbabwe's aged rape victims like Murambiwa.

"Earlier this year, Themba, my grandson, attacked me while I slept in my bedroom, threatened to kill me if I made any noise before he raped me. It pains me that my own blood did this to me," Murambiwa told IPS.

Murambiwa is taken care of by her two daughters, both of whom divorced their husbands and one of whom is Themba's mother.

The daughters are also strained taking care of their aged mother.

"It's not easy looking after an aged parent. We have limited resources, and she always complains that we are not doing enough, yet none of us is employed. We are vendors living from hand to mouth," 52-year-old Letiwe, one of Murambiwa's daughters, told IPS.

But many aged Zimbabweans like Murape and Murambiwa said they could not fight off their abusers because they were in desperate need of care.

With limited resources to support its senior citizens, Zimbabwe has no social grants for the aged.

This means aged persons like Murape and Murambiwa are on their own as they bear the brunt of abuse in the twilight of their lives.

Many of Zimbabwe's aged citizens have no money after the 2008 hyperinflation eroded their savings.

This time, a new round of inflation has not helped the country's growing number of abused aged persons who depend on their relatives.

Inflation currently hovers above 257 percent in Zimbabwe, with food prices skyrocketing, meaning the lives of aged persons such as Murape could even worsen.

Other than inflation, for aged men - widowers that have remarried, according to HelpAge's Gavi, abuse could be even worse.

"Some older men have also faced abuse from their younger wives who mistreat their spouses wantonly, leading to some of these men finding themselves on the streets," said Gavi.

Tagged:
Copyright © 2022 Inter Press Service. All rights reserved. Distributed by AllAfrica Global Media (allAfrica.com). To contact the copyright holder directly for corrections — or for permission to republish or make other authorized use of this material, click here.