Tobacco Harm Reduction - Health Education And Prohibition. Are They Incompatible? 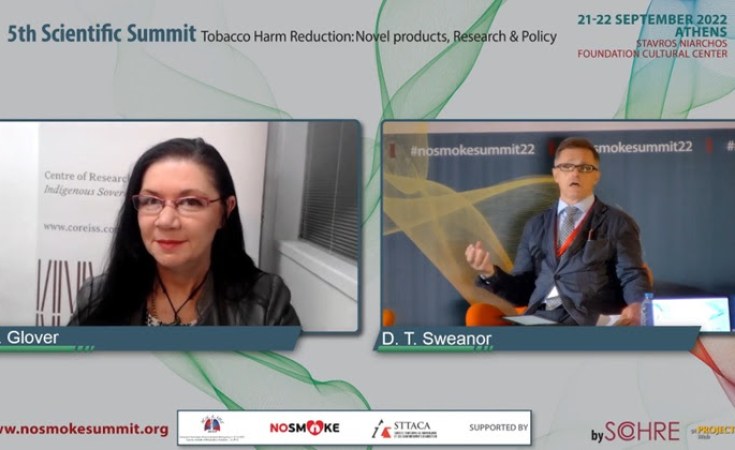 The 5th Scientific Summit on Tobacco Harm Reduction took place on the 21st and 22nd of September 2022. This year’s theme was Novel products, research and Policy. By “novel products” the summit referred to “products that are new and different from anything that has been seen, done, experienced”. Organized by SCOHRE, the international Association on Smoking Control & Harm Reduction, this event was held in Athens, Greece and was also available virtually.

The stated objectives of this summit were to:

- Discuss and debate on scientific, technological, medical, regulatory, legal and policy issues for advancing the technical capacity of the participating countries

- Provide an environment where regulatory authorities and policy makers may present their prospective course of action to the scientific and medical communities.”

Dr Marewa Glover is an indigenous behavioral scientist from New Zealand. She gave the first keynote speech of the conference. Her extensive work on Tobacco Harm Reduction among disadvantaged people in a country considered as a success story in smoking control, allowed her to share her perspective on what challenges countries, that want to reduce smoking-related harm, may face: “campaigns of disinformation” and “liberal paternalism” were among the challenges she stated. But also “propaganda campaigns demanding prohibition and policies for which there are no real-life scientific trials” according to her.

Implemented in 1990 in New Zealand, the comprehensive Smoke-Free Environments Act is viewed as very progressive as it fully embraces a harm reduction approach to smoking “with great results”, she said: “Smoking prevalence has diminished in New Zealand from 27% in 1992 to 18.4% in 2011-12 and then to 10.9% in 2020-21, one of the lowest in the world”, she continued.

For her, prohibition is not a solution. Long term monitoring and evaluation of scientific data is vital, and education is key:

“Look how long it took for New Zealand to reach where we are... In countries of different cultures, the use of extremely punitive prohibition is common. We have seen, I think it was in Thailand, people who were arrested and put in jail for 10 years for vaping. What we’ve done in New Zealand shouldn’t be automatically imposed or expected to work the same way in LMICs that haven’t done the health education”.

For Carrie Wade who is Senior Manager, Global Scientific Engagement at Philip Morris International (the company has massively turned to smokeless products in terms of research & development) - health education is vital as well. Nevertheless, she mentioned in her speech that there was a misrepresentation of scientific evidence that adds confusion to the story of these novel tobacco products and jeopardizes public health:

“I think it is really important to remind people, whether its health professionals, policy makers or regulators, that it takes a lot of hard work to go through all the literature and get a solid understanding of these products. It is really difficult, and you can’t do it properly if you are just reading news clips or very quick reports. But to go to some of the more substantive reviews – look to Public Health England (which has introduced vaping as a means of stopping smoking and reducing the risk of developing cancer), and National Academy of Science –to find some of the reports that have been written by independent bodies, government agencies. It is very exhausting, and it takes a long time but that’s where you get the best information.”

Across Africa, smokers don’t have adequate access to tobacco novel products such as e-cigarettes, oral or heated tobacco, with the exception of South Africa.

Chimwemwe Ngoma, social scientist and Tobacco Harm Reduction advocate from Malawi said in his latest report  published this month that independent and science-based policies are critical:

Most of the countries in Africa practice strict regulation making no distinction between combustible cigarettes and new smokeless alternatives. The prevalence rate of tobacco smoking in Africa is 14%. It is the lowest compared to the Americas (23%) and Eastern Mediterranean (31%), but its growth is the highest in world.