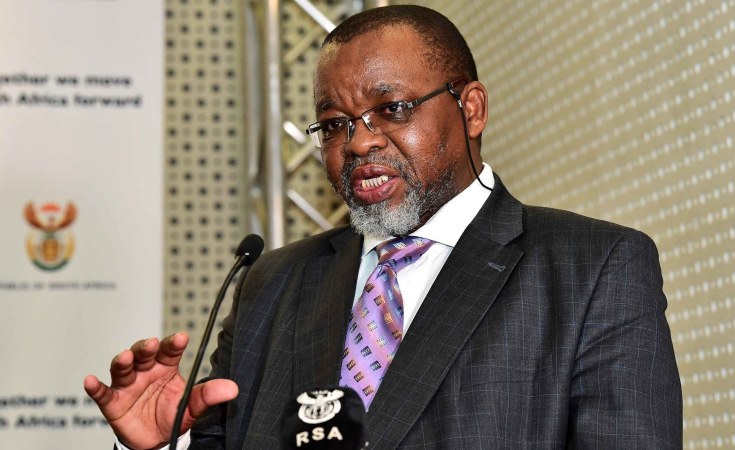 GCIS/Flickr
Mineral Resources Minister Gwede Mantashe briefs the media on the gazetting of the Mining Charter in 2018.
The Exchange Africa
By Laurence Sithole

For many years, this publication produced in conjunction with leading business weeklies is the holy grail for stakeholders in the mining industry with a particular interest in South Africa and the region. This year's publication is freely available on the Mining MX website.

The 2022 edition ran under the theme "Rock Bottom: Why South African Mining cannot risk more Mantashe blunders". The theme is a harsh though factual indictment on the effect of government policy on the mining industry personified by the current minister of mines and former communist Gwede Mantashe.

Minister Mantashe is reputed to have a very thin skin and is not hesitant to display it in public and with international news cameras rolling. The mines and mineral resources minister made a very thinly-veiled threat to what he described as "strong and powerful mining executives" who he said insulted the state.

He was referring to the chief executive of diversified metals miner Sibanye Stillwater, Neal Froneman, who had in previous interviews attributed the socio-economic woes experienced in South Africa to poor leadership and not any misconduct on the part of the mining industry. Minister Mantashe did not take kindly to such dissent by a mere mining executive... The minister's comments at the annual general meeting of the Minerals Council of South Africa went like so: "We have observed a growing temptation to insult the state by strong and powerful mining executives. Such executives have no regard for the industry's international ratings and its relations with government, which makes it difficult to process industry issues." To appreciate the gravity of this statement one needs to appreciate the context in which it was said. The mines minister made his grand statement during a convocation of an organization that represents the South African mining industry as a whole...

This was not an endearing move on the minister's part as he represents the position and disposition of the government towards an all-important industry. Stakeholders should make no mistake and be under no illusions; it is the mining industry and its activities that singlehandedly created the modern state known worldwide as South Africa. There are circles in the investment community that believe the mining sector is in its descent.

There is some merit in this premise and narrative. The merit comes from the investment exodus that the country has experienced from mining majors that have left South African shores altogether like BHP or those that have drastically reduced their operations to near miniscule capacity. Companies like Anglo American and its gold off-shoot, Anglo Gold Ashanti have significantly reduced their South African operations and increased operations internationally. Anglo Gold Ashanti has no mining operations in South Africa, only its head office, yet its mining operations span every continent on the planet.

The reason for the capital exodus of the mining industry in South Africa especially has been not only the mutual hostility between government and the mining sector. There is no country worldwide where government and business view each other with mutual suspicion and are openly hostile with each other where those same nations are economically progressive. The capital exodus from South Africa is not a figment of the imagination of the country's critics. It is a matter of fact.

According to S&P Intelligence there has been a gradual decline in the amount of exploration spend in South Africa by mining companies. Since 2000 to date the highest exploration spend has been approximately US$400 million recorded in 2007. Expenditure on exploration began to decline from 2008 to 2010 and marginally increased between 2011 to 2012; however, the declining trend resumed in the years since. Exploration activity is important because it is a precursor to future mining activity in that jurisdiction. If the exploration process identifies minerals can be commercially extracted, then mining in the future may be possible. Our demand for minerals is increasing; for example, we need more copper to build renewable energy assets such as wind turbines. This demand is helping drive an increase in exploration across the state according to the website of the Victoria State Government in Australia which is a significant mining country.

According to the South African central bank the height of exploration spend was around 2007 which is consistent with the findings reached by S&P Intelligence. The South African central bank, however, goes on to attribute the decline in exploration spend to the implementation of what the government calls SAMRAD around 2010/2011. The South African Mineral Resources Administration or SAMRAD was and is an attempt to streamline the applications process for prospecting rights, mining permits and mining rights. The goal was and is to make it more transparent. When it was created its aim was to increase the ease of doing business in the country.

South Africa's ratings had been languishing. In 2011 Fraser Institute released its 2011 Survey of Mining Companies and one of the aspects of the survey included rating the ease of doing business in a specific country, considering government regulatory policies. South Africa ranked 43 out of the 79 jurisdictions that the survey included. The results of the survey were published in Creamer Media's Mining Weekly journal.

The success or failure of this initiative did little to arrest the declining investment dollars going into the mining sector. This is despite that in South Africa there are mineral seams and mineral complexes with known mineralization. The government through its Department of Mineral Resources and Exploration (DMRE) has set a very ambitious (some have even said unrealistic) goal of attracting no less than 5 percent of global exploration spend to South African shores by 2025. This 5 percent translates to US$900 million. The mining industry is skeptical of this goal because it feels there is lack of concrete action towards that goal. There are serious bottlenecks in the way of this goal being achievable, the most contentious being the Black Economic Empowerment requirements needed to be granted an exploration license. In South Africa, a foreign investor needs to prove that their exploration outfit is 51 per cent black-owned before they are granted the license to prospect. This requirement is regarded by industry experts as counterintuitive.

This is because at the exploration stage of a mining venture, hardly any money is made. Mining projects at exploration stage are strongly cash-flow negative and this scenario offers no benefit to the empowerment partner. Added to this, the exploration stage is highly risky and most if not, all financiers are not keen to part with any equity at all let alone an interest of 51 percent. The DMRE still insists on proof of black ownership even though the Mining Charter, the governing legislation of the mining industry, no longer requires it. If South Africa is surprised that mineral exploration spend is on the decline and would like to know where to begin to take action to reverse the trend, it must begin by removing antiquated and outmoded regulations that constrict the free flow of funding to exploration. Suggestions have been made by players in the mining industry to make the country a more attractive destination for mining activities. In addition to reforming antiquated regulations, the dysfunctional SAMRAD system needs to be replaced by a more efficient mechanism.

Other suggestions proffered include the reform and clarification of the mandate of the Council for Geosciences which from the DMRE strategy document appears to have far reaching authority to do as much as to take equity interests in exploration ventures. This is rattling for mining entrepreneurs and project promoters who also feel that the status quo places too much power in the office of the minister. The strategy documents state that the DMRE together with the CGS will identify and assess projects with potential. This is contentious with mining executives and entrepreneurs in that it amplifies the role of the minister. This can easily lead to corruption.

These are but a few of the matters which have caused South Africa to lose its pull as an investment magnet. The country along with its northern neighbour Zimbabwe needs to take corrective action to make their respective jurisdictions more appealing to explorers looking to set up mining activities on their shores. South Africa and Zimbabwe should look to emulate those countries identified by research conducted by the Fraser Institute as the most attractive in terms of investment such as Australia.

Why Australia is the leading mining destination