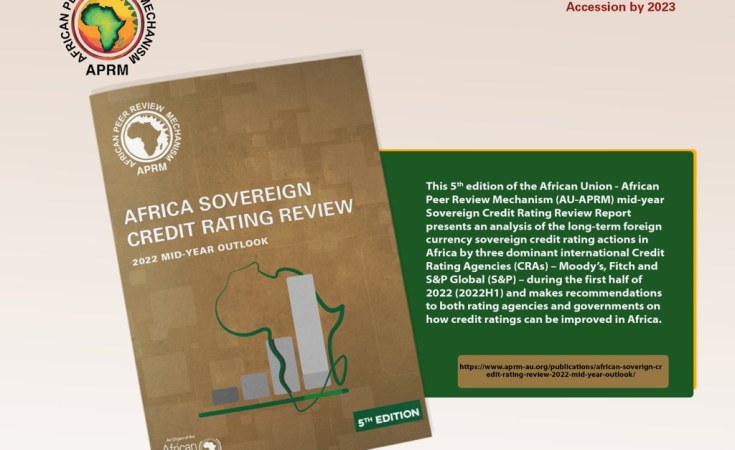 @APRMorg / Twitter
The African Union has made recommendation to the 'big three' credit rating agencies and governments on how ratings for Africa can be improved.
allAfrica.com
opinion By Mahesh Kotecha

Washington, DC — The ratings of African governments have enabled a robust Eurobond market for African sovereign bonds with over $300 billion issued in the last couple of decades. Maintaining access to this market has persuaded many African countries not to seek debt relief under the misconceived G-20 Common Framework (CF). Only three African countries have filed to use the Framework - Zambia, Ethiopia and Chad. None of them has an agreement two years after the CF was announced.

The G-20 approach has been ineffective for two important reasons. First, it in effect requires those who file for relief to default on their Eurobonds, closing off the country from capital markets. Most countries chose to continue to be able to issue Eurobonds. Second, CF is available only to the Least Developed Countries and does not apply to Middle Income Countries like Sri Lanka, which is in default.

There is a school of thought - at the African Union, for example, and parts of the United Nations - that African ratings are too low, due to a misperception of African risk. By contrast, major industrialized countries like Germany and the United States enjoy high AAA ratings that allow them to borrow at lower interest rates, whereas Zambia has languished with D ratings since it defaulted two years ago and has no market access.

The UN Economic Commission for Africa, which identifies liquidity risk as one reason for this premium, has proposed a Liquidity Support Facility to reduce risk. The African Union and others have proposed an African rating agency to provide alternative ratings, which is not a bad idea if Africa has an investor base that will pay attention to such an agency – as Chinese, Japanese, Indian, Malaysian and Nigerian investors listen to rating agencies based in those countries.

One such new agency – the Sovereign Africa Rating - just assigned a BBB rating to South Africa, which has lower, non-investment grades by the big three - Standard & Poor's, Moody's, and Fitch. The credibility of an agency that gives out such higher ratings is likely to be discounted by international investors just like grades in different-tier educational institutions.

Rating criteria of the international agencies are indeed “one size fits all” by design as they are meant to assess the likelihood of repayment or default. They use metrics from a long history of sovereign defaults (see Reinhart and Rogoff in “This Time Is Different”), tested over time as seen in corporate default studies. The agencies justify low African ratings on the basis of low levels of economic development, undiversified economies, high levels of debt, limited financial flexibility and high political risks.

But they err from time to time - as, for example, on South Korea during the Asian financial crisis.  -- as no such system is perfect. Rating agencies do learn from such mistakes or market comments and make adjustments in their criteria from time to time.

The greater benefit for countries and companies in Africa seeking ratings is from learning the ropes and getting a rating they deserve -- nothing less, as they often can and do fall short. And with improved performance they can achieve better ratings over time. One client – First Bank of Nigeria – was just upgraded by Fitch under our advice a few weeks ago.

There is a role for an Africa-focused rating agency for investors who concentrate on Africa and seek only relative risk assessment across this universe. For them the definition of investment grade need not be the same if their risk tolerance is higher. But investors will generally continue to rely on the big three rating agencies.

Mahesh Kotecha, born in Uganda and a naturalized U.S. citizen, is President of Structured Credit International, which advises African supranationals, banks and governments. He is a member of the Bretton Woods Committee, International Advisory Panel of the East African Development Bank, Advisory Council of UN Capital Development Fund, Chatham House, and the Council on Foreign Relations, where he directed a Roundtable on Capital Flows to Sub-Saharan Africa, which recommended in 2002 that African governments seek sovereign ratings to reduce perceptions of risk and to attract capital.