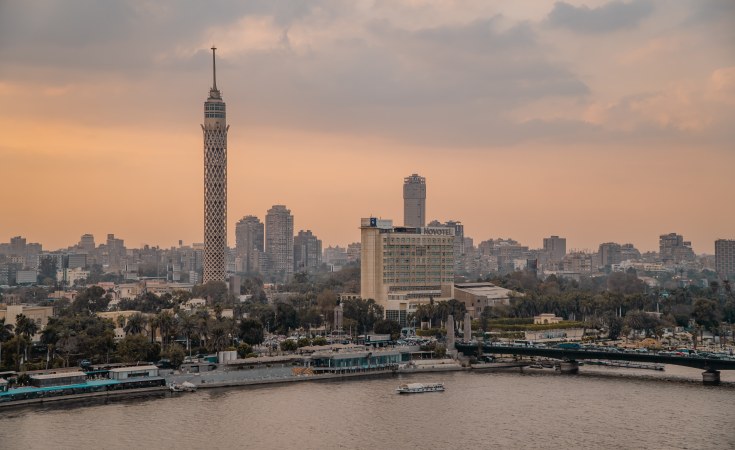 The ability to speak freely in Egypt is currently very constrained. Individuals, groups and NGOs face significant barriers to participation in the political process. And the same holds for the exchange of opinions in the everyday public sphere.

But promising signs have emerged during the COP27 international climate change talks in the country. Egyptian Streets, a grassroots online media outlet, has reported that the independent newspaper Mada Masr has been de-censored, along with Medium and Human Rights Watch, for the first time in five years.

Other outlets, however, such as Al Jazeera and Huffington Post, remain censored and unavailable online.

Back in 2018, journalist Yasmine El Rashidi called attention to the "novel" degree of censorship of political and social speech in Egypt. She labelled this a "moment of crisis" and alleged that the divided, antagonistic state of civil society in Egypt was part of the problem.

From graphic novels to Facebook rants and now TikTok dance videos, social speech and expression have been subject to significant governmental intervention. Young people have been imprisoned for multi-year terms for holding up signs, making jokes, producing satirical songs, eating fruit suggestively, or laying down dance moves. Professors have lost their jobs for posting dance videos to their personal social media.

So do the decisions taken during COP27 in Egypt suggest a change of heart? That the government is considering relinquishing the control of everyday space? And that it's decided to fulfil its post-revolutionary republican promise?

The jury is still out, but much depends on swift correction of deficits in the judicial system, coupled with a broader and permanent opening of Egyptian society.

The problem for the country is that the degree and scope of governmental intervention is countenanced by many stakeholders, for a variety of conflicting reasons. Feminists and hijabi women, human rights groups and progressives, parents and their children, do not necessarily agree on what it is permissible to regulate, or why.

Here are some examples that illustrate this. Electro-folk festival music (mahraganat), deemed a corruption of republican values, has been banned from public performance. Female entrepreneurship and social media influence have been discouraged as a breach of family values, normalising gendered guardianship over female chastity and morality. Feminists will invite the public prosecutor to punish harassment, but also protest when female dress is surveilled and punished.

As a result, youth speech, political activism about rights, and Islamist expression have all been subject to shifting prosecutions.

Arguably, civil society is the ultimate loser, subdued by a powerful state that enforces vague laws against a variety of groups and speakers almost willy-nilly.

Expressing their own doubts about the freedoms of Egyptians, the bipartisan Working Group on Egypt has sent multiple letters to US president Joe Biden and the Trump administration over the past three years.

A group of Democrats penned a bicameral letter to Egyptian President Abdel Fattah El-Sisi on 19 October 2020. More recently, a group of past Nobel Prize recipients have witheringly asked whether a future without rights is a future worth saving. Of particular concern is the Egyptian-British activist and thinker Alaa Abd el-Fattah, currently imprisoned and on a hunger strike.

The barriers to speech and debate are not just accidents or occasional governmental heavy-handedness. They indicate a deep, internal tension within and between the 2014 Egyptian constitution, the current regime's stated aim to advance civil society interests, and prevailing social and political practice.

The 2014 republican constitution guarantees substantial and conflicting freedoms. The preamble describes Egypt as a land of popular sovereignty. But Article 2 declares that Islamic sharia is the "principal source of legislation".

Article 64 characterises freedom of belief as "absolute", and freedom of thought, speech and expression are guaranteed to all in Article 65. But the liberal letter of constitutional law is hard to put into practice.

Take the Danish satirical cartoons published in 2005, and republished by Charlie Hebdo, as an example. My students routinely argue for the prosecution of religious blasphemy, citing freedom of religious belief, at the expense of freedom of expression. The tension between rights is hard to work out.

According to the close invigilation of independent media, legal practice clashes with constitutional commitments to a free civil society. Political and sometimes even apolitical speech is criminalised as "false news" or joining a terrorist organisation.

Recently, about 150 people were detained over possible economic protests. This heavy-handed reaction to ongoing dissent is paradoxical in a post-revolutionary republic.

Social media is a particularly fraught landscape, where careless or non-political speech becomes a permanent written record that can be held against speakers.

Civil society groups also argue that the criminal justice system fails to protect individuals in the exercise of their rights. Delays in justice, lengthy pretrial detention and rotation - detaining, eventually releasing, and then rearresting people under new charges - is the norm, not the exception.

So what are the signs of change, if any?

Straws in the wind?

Egypt recently introduced two new criminal justice initiatives amid complaints that its commitment to human rights was more show than substance. The first is a newly revived Presidential Pardoning Committee, first formed in 2016. It extends leniency to detained or sentenced offenders who have not committed violent acts.

The second, "Immediate Justice", looks to increase the swiftness of justice. But this could compress death penalty trials to a matter of days, potentially compromising the rule of law.

Thousands of prisoners have been released since April, and President el-Sisi has asked for the social reintegration of those pardoned, not just their release. These statements suggest that the end-game of current judicial reforms is transformative: to "close" the political prisoners file, complementing the official rollback of the state of emergency in October 2021.

Arguably, Egypt in 2022 might be described as currently at a crossroads. It is a young, massively online country. Progress is in the air. And while policy change is needed, change is also needed in a deeper and more logically consistent register.

The regime recently called for a new national dialogue, pointing towards a "new republic" grounded in dignity and a "comprehensive concept of human rights". This year has been declared the "year of civil society".

How might a new civil society theory for a new republic look?

What needs to happen

A liberal theory places quasi-absolutist rights of speech and expression at the heart of a tolerant republic, with equality under law.

In such a space, the ability to be wrong and to experiment with different ideas is respected. Violent contestation then can be distinguished from differences of opinion. Difference, as opposed to mere diversity, is respected.

In Egypt, that would mean tolerating self-expression by women, veiled and unveiled, and respecting the rights of the LGBTI community to be present in the public sphere. It also means accepting the inevitabilty of difference and dissent.

For liberty to work in Egypt, not just a national dialogue, but a clearer understanding of the normative politics - and power - of dialogue itself, should be the goal.