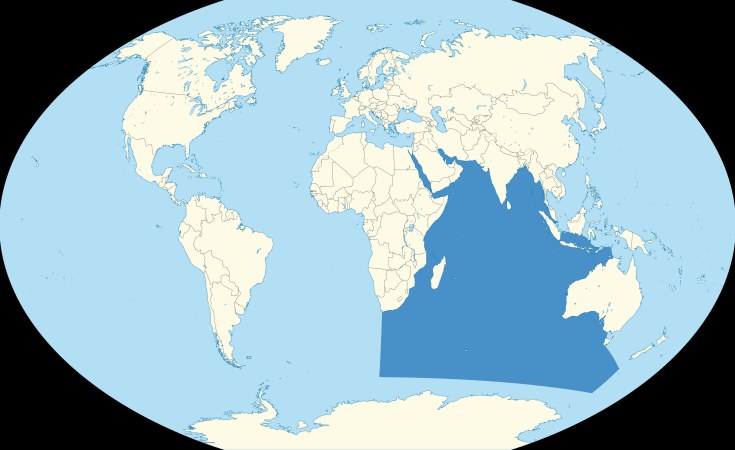 Aplaice / Wikimedia Commons (CC BY-SA 4.0)
A map showing the location of the Indian Ocean.
The Exchange Africa
By Albert Nangara

When you hear anything about pirates, what comes to your mind? Is it Captain Jack Sparrow from Pirates of the Caribbean?

Pirates of the Caribbean is an American fantasy swashbuckler film series produced by Jerry Bruckheimer and based on Walt Disney's theme park attraction of the same name.

Remove film and put reality, remove fantasy and put fear, then remove Caribbean and put the Indian Ocean. This takes us back in 2010 at the height of the Somali piracy threat. This made the Indian Ocean to be classified as a high-risk area (HRA) to protect ship owners, operators, and seafarers from plying routes patrolled by pirates.

As a high-risk area, Kenya was paying billions to shipping lines for insurance of their goods.

But there is a break. The International Maritime Organisation (IMO) has removed the Indian Ocean from the list of High-Risk Areas (HRA) giving a major boost to trade for Kenya and the wider Eastern African region.

The decision was communicated during the 106th session of the Maritime Safety Committee at the International Maritime Organization in London. This is the UN agency responsible for the safety and security of shipping, by the Best Management Practice (BMP-5). It consists of the five largest global shipping industry associations.

Withdrawal of Kenya from HRA will take effect on January 1, 2023. This will allow ship-owners and security providers to adjust operations as chart amendments by hydrographic organizations and other stakeholders are completed.

"Removing the Indian Ocean from the list classified as high-risk areas (HRA) is a major boost for trade for Kenya and the wider Eastern African region.

"The discontinuation of the Indian Ocean as a High-Risk Area will save businesses billions of shillings in insurance fees, ultimately lowering the prices of goods in Kenya and the wider eastern African region," said Kenya's High Commissioner to the United Kingdom and Permanent Representative to the International Maritime Organisation Amb. Manoah Esipisu.

"The discontinuation will greatly boost commerce and remove the security cloud that has hang over the region for more than a decade."

The process of declassifying the Indian Ocean was lobbied by a multi-agency team from Kenya that was supported by Kenya High Commission in London.

One of the reasons that prompted BMP-5 to declassify the Indian Ocean was enhanced security in the area. A downtrend of piracy attacks in the Indian Ocean was recorded over the past years. The decline was attributed to Kenya's increased vigilance in the waters and crackdown on Al Shabaab extremists.

No piracy attacks against merchant ships have occurred off Somalia since 2018, according to the International Chamber of Shipping.

He said the Kenya High Commission in London and a multi-agency in Kenya have led a sustained campaign to ensure the end to the classification of the Indian Ocean as a high-risk area.

The Kenyan government in a bid to keep the nation's waters safe has deployed an increased security in the waters, including the deployment of the Coast Guard according to a press statement sent from the Ministry of Foreign Affairs.

It also stated that Kenya appreciates BMP-5's ongoing assessment of the security situation in the Indian Ocean and the Southern Red Sea.

An analysis conducted by the BMP-5 and the IMO Secretariat, and recent security developments have indicated that there is a decrease in the number of incidents of piracy and armed robbery in the region by approximately 22 per cent globally compared to the same period last year.

Kenya is also preparing to implement long-term partnerships with the industry represented by BMP-5 in order to continue monitoring maritime security threats in the region and ensure the safety and security of owners, operators, charterers, and seafarers.

The blue economy has great potential to contribute to higher and faster GDP growth in Kenya. Innovation and growth in the coastal, marine and maritime sector could deliver food, energy and transport, among other products and services, and could serve as a foundation for sustainable development in Kenya.

The Indian Ocean provides a great maritime space and sea-lanes that connects the great economies of the West and East. The Indian Ocean is the third largest sea in the world, linking East, South, South East and West Asia, as well as linking Africa and Europe. Can Kenya benefit from the ocean more because of this new development? The answer is definitely a yes.