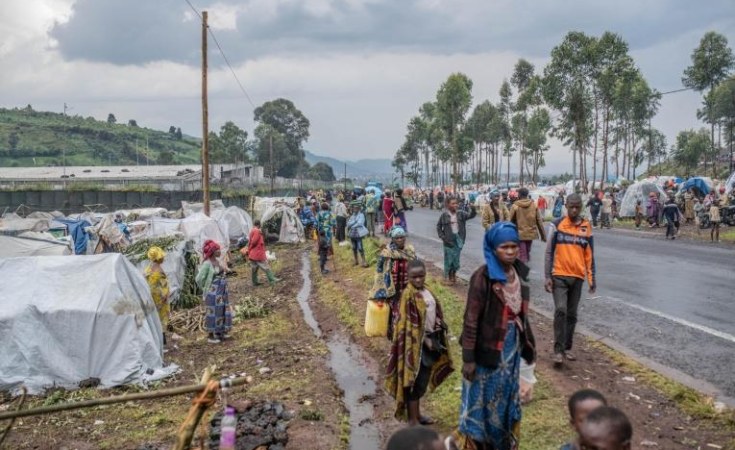 Renewed clashes in recent days in eastern of the Democratic Republic of Congo have forced more people out of their homes, worsening the humanitarian crisis in the country's North Kivu province.

In the past month, M23 rebels have launched a new offensive against government forces, capturing large parts of territory in Rutshuru, in the north of North Kivu province, as well as the towns of Rutshuru-Centre and Kiwanja.

Tens of thousands of people who were harboring in and around these towns have now fled south. Many end up in makeshift camps around the regional capital Goma and the town of Lubero to Goma's north. The majority lack basic necessities such as clean water or even tarpaulins to build shelter from the "frequent rain," a UN news release said.

One of these camps is Kayembe, in Nyiragongo territory just outside of Goma, where numbers have swelled in recent days from some 700 families to more than 2,000, according to camp management.

So many new familes have arrived that the school compound where the temporary camp is set up is overflowing.

"Displaced people are suffering enormously in this camp. The old and the new [arrivals] are going through difficult times. They have no food, no drinking water," said David Sekora, the camp's secretary, adding that people had been without government or international assistance for two to three weeks. "This is serious."

Sekora said that the camp had already started to record cases of cholera, and some of the camp's residents had been admitted at a nearby clinic because of the infection. People with cholera can develop explosive watery diarrhea and vomiting that can lead to severe dehydration and even death. It's closely linked to poor sanitation, such as lack of toilets or clean water, and is often found in overcrowded settings like Kayembe.

Members of the collective Goma Actif, which brings together artists, activists and businesspeople from Goma, have been helping those at Kayembe as best they can. They are distributing porridge and bread to the vulnerable -- children, women who are pregnant and breastfeeding, and the elderly.

"We are providing them with food so that they can hold out until major humanitarian organizations start helping them," Depaul Bakulu, one of Goma Actif's members told DW.

"We haven't had anything from anyone except this porridge we receive every morning," she said. "The government has brought food to the other camps in [the territory] but not here to Kayembe.

Attempts to restore peace to the eastern part of Congo will resume on November 21 in Kenya's capital, Nairobi.

Former Kenyan President Uhuru Kenyatta, who is the facilitator of the East African Community-led talks, visited Goma on Tuesday after talks in the capital Kinshasa on Monday.

In Goma, Kenyatta met with DRC authorities as well as community members of North Kivu, South Kivu and Ituri, the three eastern provinces of the DRC and the regions most affected by ongoing violence.

After visiting Kanyaruchinya camp, just 3 km (1.9 miles) from Kayember, Kenyatta appealed to the various rebel groups in DR Congo to put down their weapons as a prelude to the upcoming negotiations.

"All these children, mothers and old people we have seen have become strangers in their country. Whatever our differences, ... let us have pity on them and stop the war before we start talking," he said.

More than one hundred armed groups are thought to operate in DRC's east, according to Global Conflict Tracker.

The Congolese government has since refused to negotiate with the M23 group, which it describes as a Rwandan-backed "terrorist" movement, something Rwanda has denied several times.

Conflict has ebbed and flowed in eastern Congo now for some 30 years. As such, many here don't have much faith in the ability of talks to improve the situation. Instead, they say, the army needs to be strengthened.

"Nothing will come from Nairobi," he said. "So instead of talking, it is very important to focus on how we are going to end to the insecurity in the east."

Patrick Mundeke from the Goma Actif collective had similar views, saying that "only a professional, trained, well-equipped, well-paid army" could prevent the ongoing violence.

Goma resident Josue Wallay told DW that even if the various parties reached an agreement in Nairobi, people in North Kivu wouldn't benefit.

"There have been signed agreements in the page, and none of them have been favorable to us," he said. "Rather the agreements destroy and continue to plunder our country's natural resources."

Thousands of people marched in various Congolese cities on Thursday in a show of support for the army as it fights the rebels.