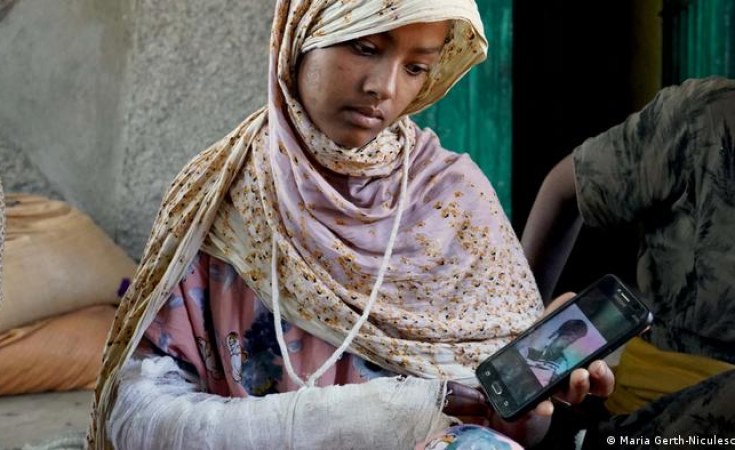 Maria Gerth-Niculescu / Deutsche Welle
A young girl with her arm in a cast after being shot (file photo).
Addis Standard (Addis Ababa)

Addis Abeba — In their first interview to local media which was aired on regional DW TV, Lieutenant General Tsadkan Gebretensae, and Getachew Reda, the Tigrayan officials who led the team from region during the peace talks with the federal government held in Pretoria and Nairobi, said that the peace agreement was mainly aimed at rescuing the people of Tigray from atrocities, hunger, sexual violence, and displacements. The two officials also accused Eritrean forces of continuing to commit atrocities on civilians in the areas they are present.

The two officials echoed an earlier statement released by the regional authorities accusing Eritrean forces of continuing to commit atrocities against Tigrayan civilians. The statement from the regional state issued on 19 November further accused Eritrean forces that in addition to committing crimes against humanity, they were engaged in looting properties belonging to individual and religious institution. Footage aired on the regional media, Tigray TV, also showed dead bodies scattered on the ground which it said were some of 63 civilian victims, including ten children, killed by Eritrean forces in Egela, Central Tigray, last week. regional officials continue reporting atrocities committed by Eritrean forces since the cessation of hostilities were agreed in Pretoria.

"Our intention with peace agreement is to save our people from death due to hunger, and lack of medications, atrocities, displacements, and other abuses," a member of central command of the Tigrayan forces Lt. Gen.Tsadkan said.

After realizing the scale of hunger and the mounting death of civilians during the war, the Tigray government discussed with the commanders of its forces and reach on agreements to declare permanent cession hostility to rescue the people of Tigray he added.

"We think that we have reduced civilian suffering and destruction of property by reaching on agreement with the Ethiopian government," Gen Tsadkan said.

Getachew Reda, central committee member of the Tigray People Liberation Front (TPLF) on his part said that ensuring the safety of the people of Tigray people was a priority in the peace agreement. According to him the agreement has been reached to resolve political issues that dragged both sides into the two year war in accordance with the constitution.

With regard to the issues of disarmament, Getachew said that it will not take place until the safety of the people of Tigray was secured.

"Peace is our only choice" he said, stressing the need for both parties to translate the agreement into practical terms.

Getachew also said that after the Pretoria permanent cessation of hostilities agreement, there is almost no militarized hostilities going on between the federal and Tigrayan forces, despite Eritrean forces involvement in committing atrocities.

Last week US government said it is committed to additional sanctions on Eritrea if they [Eritrean leaders] fail to pull out their troops from Ethiopia.

Since the onset of the war in November 2020, Eritrean forces have been accused of acts of atrocities they committed against Tigrayan civilians, which has long been documented by human rights organizations, including the state backed Ethiopian Human Rights Commission (EHRC), highlighting "grave human rights violations and an attack against civilians" in Axum City, Tigray region.

"This permanent secession of hostilities shouldn't be taken as a break to start a fourth round of war. It should be the end of the war forever," he said.

During his parliamentary appearance last week, Prime Minister Abiy Ahmed assured law makers that that the government would respect and was fully committed to implement the peace agreement it signed with the TPLF. "In winding up the conflict peacefully there will not be any loss but profit", he said, adding that "we will keep our words and implement the accord honestly".

Lt. Gen. Tsadkan commended the opening up of humanitarian access and said that it would enhance the trust between the two parties and encourage further implementation of the agreement.