Libya: The UN Is On the Clock in Libya - Four Key Lessons to Learn Fast 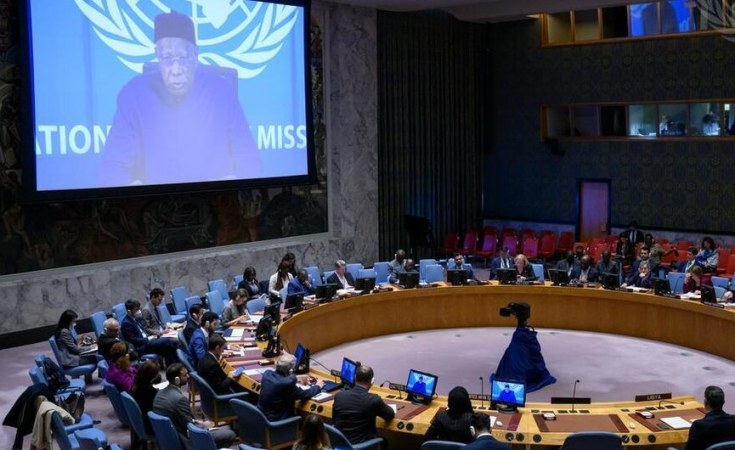 Loey Felipe / UN Photo
Abdoulaye Bathily (on screen), Special Representative of the Secretary-General for Libya and Head of the United Nations Support Mission in Libya, briefs the Security Council meeting on the situation in Libya, October 2022.
Chatham House (London)
analysis By Tim Eaton

The clock is ticking for the UN Special Representative to Libya, Abdoulaye Bathily, who must outline his plans before his window of opportunity snaps shut.

Abdoulaye Bathily was appointed UN Special Representative to Libya in September, the eighth UN representative to attempt to negotiate a way out of Libya's governance crisis since 2011. He faces steep challenges. The political situation in Libya remains at an impasse, with the re-emergence of rival governments and heightening factionalism. Internationally, Bathily inherits a UN mission that has been subject to significant turnover and capacity challenges, a deeply divided Security Council, and various agendas put forward by interested states.

'There appears to be broad agreement that Libya's institutions are facing a serious legitimacy crisis', Bathily told the UN Security Council on 15 November. 'There is also consensus around the need to coordinate bilateral and multilateral diplomatic initiatives and to coalesce behind the efforts of the United Nations'. Both statements are true, but the latter is precarious. While Bathily continues to consult and assess his options, he may have less time than he thinks to make his plans clear.

Every plan for Libyan transition since 2011 has sought to put in place an 'interim' administration, and every single one has exceeded its mandate.

Bathily's appointment has initiated a flurry of political activity. Khaled al-Meshri, the leader of the High State Council, and Agila Saleh, the speaker of the House of Representatives, indicated in late October that they have agreed to resume talks on holding elections and reiterated their support for the process to replace the leaderships of sovereign institutions. In recent days and weeks, reports have surfaced that they are also close to agreeing on the formation of a new government. Rumours abound that they would both be handed leadership roles in the proposed new administration, which would - at least in theory - be given a limited mandate to hold elections.

The prime minister of the Government of National Unity (GNU), Abdelhamid al-Dabaiba, has presented his own plans, indicating that his government will undertake a public consultation on the pathway to elections. Few take Dabaiba at his word as he has previously reneged on a promise not to run in elections and has consistently exceeded his remit to reunify institutions and prepare the ground for an end to the political transition. As tensions have risen in recent days, his GNU also reportedly sought to prevent the High State Council from holding session.

The Presidency Council of the GNU is focusing on its mandate for national reconciliation - a process which has never materialized since Gaddafi was overthrown in 2011 - by looking at a more bottom-up political process and rightly highlighting the absence of a social contract. However, this process appears to be kicking elections into the long grass.

The Presidency Council also sits at the heart of some international proposals to break the impasse. By issuing a decree to pass an electoral law and constitutional basis, the Presidency Council could circumnavigate the House of Representatives and High State Council, but this would likely be contested.

Lobbied from all directions, Bathily will have to make clear-eyed decisions on the options available to him. To help him decide, there are four lessons he must learn from Libya's recent past.

The most important lesson Bathily must learn is that agreement between two individuals will not suffice.

First, Bathily should beware the trap of interim arrangements. Every plan for Libyan transition since 2011 has sought to put in place an 'interim' administration, and every single one has exceeded its mandate. The GNU is just the latest example. The simple fact is that once a discussion about an interim administration emerges, talk of any transition plan cedes into the background as leaders work assiduously to make their interim status permanent. An interim government led by Saleh and Meshri could continue to present superficial progress over the development of electoral laws and a constitutional basis for elections - as they have done throughout the extended negotiations this year - without making actual progress.

Second, Bathily should acknowledge that the existing group of institutional leaders have lost legitimacy and cannot be relied upon to find a sustainable solution. The mandates of the House of Representatives and the High State Council have long expired and the GNU has not respected the mandate given to it. To avoid being derailed, Bathily must ensure any processes initiated by Libyan rivals have clear conditions and are not the only game in town. Saleh and Meshri's interminable negotiations should be subject to very tight time restrictions and the agreement over the legal basis for elections must be wrested from their sole influence. This could be done either by making the House of Representatives and High State Council delegations the minority in any deliberative body, or ideally by removing them entirely and delineating critical tasks to technical bodies on a pre-determined schedule.