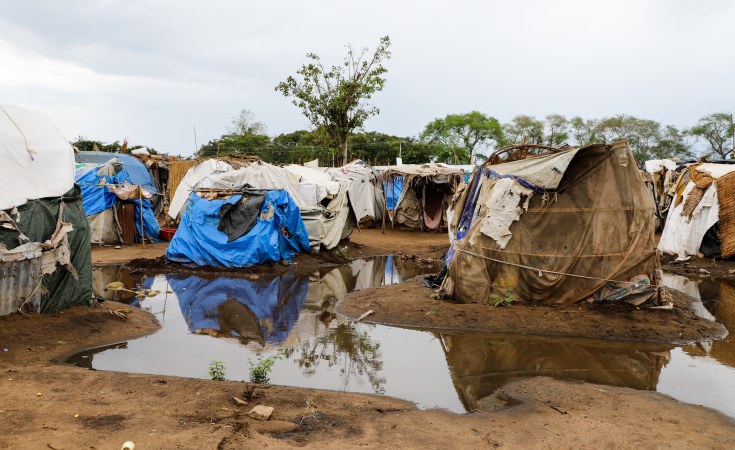 Camille Marquis/UNOCHA/NRC
Makeshift tents surrounded by water at Kigaramango IDP camp. Displaced persons have been living in this camp since the floods in Gatumba in April 2020. This camp has been completely flooded in May 2021 and people who were still living there were displaced to another site.
The New Times (Kigali)
By Emmanuel Ntirenganya

In line with the celebration of the 64th anniversary of the Republic of Congo Proclamation, the country joined Rwanda's drive to plant trees with the aim to tackle climate change effects including floods and drought, as well as erosion, officials said.

The event took place on Saturday, November 26, during the special Umuganda on the hill of Mburabuturo in Kicukiro District, and was organised by the Embassy of the Republic of Congo in Rwanda.

Jeanne d'Arc Mujawamariya, the Minister of Environment, said that the Umuganda activity was organised as part of the campaign that the Ministry of Environment and its partners have undertaken and officially launched under the theme "plant a tree, save the future."

During this drive, she said, it is expected 36 million trees will be planted countrywide - in the rainy season which normally runs from September this year to January 2022, according .

During the Umuganda, indigenous tree species and bamboo seedlings were planted while agroforestry and fruit trees were distributed to some residents in the City of Kigali to enable them to plant trees at home (for purposes including improved nutrition).

The day, he said, "is a precursor day for the process of acquisition of our country's sovereignty", pointing out that less than two years later, on August 15, 1960, the independence of the Republic of Congo was obtained.

He observed that the Republic of Congo and the Republic of Rwanda signed their general cooperation accord in 1992, and "today we also celebrate the 40th anniversary of the establishment of friendship and relations between our two countries."

"I would like to give my sincere thanks to the Government of the Republic of Rwanda for having allowed us to celebrate this highly significant event for the process of sovereignty of the Republic of Congo, through this special Umuganda carried out on the hill of Mburabuturo, through planting trees, in order to contribute to the prevention of climate change," he said.

Vincent Biruta, the Minister of Foreign Affairs and International Cooperation said that "Rwanda and the Republic of Congo have been enjoying excellent relations for 40 years so far, and have had cooperation agreements in many areas including environment and forests."

"And, we are willing to promote that relation and have cooperation agreements in many more domains," he said, congratulating the Republic of Congo on the 64th anniversary of its proclamation.

Jeanne d'Arc Mujawamariya, the Minister of Environment said the good relations that exist between Rwanda and the Republic of Congo resulted in the signing of a memorandum of understanding in the forest and sustainable development area in 2021, in order to promote cooperation in the sustainable management of forest ecosystems.

"Umuganda that we have done today puts into practice that memorandum of understanding," she said.

"We should continue working together so that we confront the global and common threat: climate change," she said, citing disasters linked to climate change, including floods, drought, bushfires, and landslides.

She underscored that erosion is a serious problem that must be addressed.

According to the State of Soil Erosion Control in Rwanda May 2022, more than 745,000 hectares of agricultural land in Rwanda are potentially eroded every year. The report was produced by the Rwanda Water Resources Board (RWB) and the International Union for Conservation of Nature (IUCN).

Using a reference year of 2021, season A, the report revealed that over 3 million tonnes crop produces are estimated to be lost seasonally (6 million tonnes annually) due to severe erosion, of which 22,000 tonnes of maize and 15,000 tonnes.

"Countrywide, there is a major issue of erosion that continues to carry away soil used for the growing of crops that feed us. That erosion is also the cause of disasters, infrastructure damage such as roads, as well as the dirtying of water natural resources, especially our country's rivers," she said, pointing out that planting trees makes an important contribution to erosion control.

Also, Mujawamariya called efforts to properly channel rain water so that it does not destroy infrastructures such as roads.

Was COP27 a Success or a Failure?

Next Story
Tagged:
Copyright © 2022 The New Times. All rights reserved. Distributed by AllAfrica Global Media (allAfrica.com). To contact the copyright holder directly for corrections — or for permission to republish or make other authorized use of this material, click here.