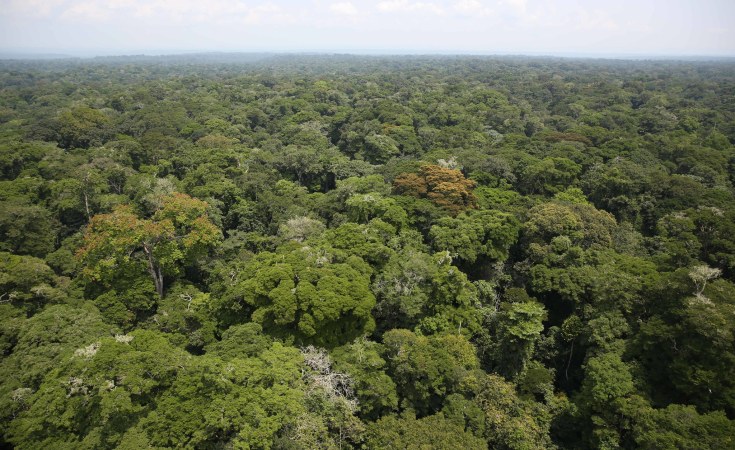 The Democratic Republic of Congo's (DRC) conflict-affected eastern provinces are home to numerous protected areas. These areas host unique biodiversity and a range of threatened species, such as the okapi, forest elephant and mountain gorilla. They are also part of the Congo Basin rainforest, which is a crucial line of defence against climate change.

The same protected areas overlap with globally significant deposits of minerals - including gold, coltan and cassiterite.

Mining is rampant in these areas, including in the Itombwe Nature Reserve, Maiko National Park and the Okapi Wildlife Reserve.

Most of this mining is labour-intensive artisanal mining, which makes use of basic technologies. However, in recent years, there has been a sharp increase in semi-industrial mining, which requires significant start-up capital for the purchase of intermediate technologies, such as dredges and pumps.

Both forms of mining have negative impacts on biodiversity conservation. Direct impacts include deforestation, soil degradation and water pollution.

More indirect effects stem from the construction of new roads to make mining sites accessible, and population growth in the vicinity of mines. This leads to further natural resource exploitation, such as fuel and construction wood extraction, bushmeat hunting and shifting agriculture.

This destructive mining in conservation areas often happens under the protection of state and non-state armed actors, who take a portion of the revenues. Thousands of people also depend on such mining for their livelihoods.

The economic importance of mining makes it difficult to stop extraction in protected areas. It's also at the heart of the complex linkages between mining, armed conflict and conservation in eastern DRC. Our study set out to grasp these linkages, which is crucial for designing effective measures to safeguard protected areas.

Based on research in the Okapi and Itombwe reserves, we found that mining sparks conflict between different branches of the state, between entrepreneurs and local populations, and between artisanal and semi-industrial miners. In a militarised environment, these conflicts can spark violence.

Mining is rampant in protected areas because it generates incomes for citizens, officials and armed actors.

Entry barriers are low, and miners' earnings are higher than those of comparable groups in the population. For many families, mining is one of the few opportunities for social mobility.

Mining revenue also tops up the meagre wages of numerous administrators, soldiers and other state officials. In the DRC, the official salaries of state workers are low or remain unpaid. Most of these workers make money on the side and extract revenue from citizens through various forms of taxation, protection fees and extortion. They are also under pressure to do so from their hierarchy, which expects a share of the income.

Read more: How extractive industries manage to carry on harming the planet

Officials from the agency responsible for regulating artisanal and small-scale mining (SAEMAPE), and the provincial ministry of mines often tax mining activities in protected areas. The Congolese armed forces also substantially enrich themselves by protecting this mining, which is forbidden in most conservation areas. Armed groups also benefit by imposing taxes in mining sites and at roadblocks.

The recent increase in semi-industrial mining, often run by Chinese entrepreneurs, has substantially benefited the Congolese army. The senior officers who protect these mining operations deploy army units to guard the installations and seal off the area from unwanted visitors.

The mining administration, too, has benefited from this development. For instance, the Mining Cadastre, the agency responsible for issuing and managing mining titles, has started to circulate a new map of the Okapi Wildlife Reserve with a different perimeter. This has allowed the agency to issue concessions inside the boundaries of the reserve, while arguing that they are located outside it.

Because mining is lucrative for many people, our research shows it has considerable knock-on effects on conflict dynamics.

To start with, mining creates friction between different branches of the state and different administrative levels. The environment ministry has contested the new map of the Okapi Wildlife Reserve circulated by the Mining Cadastre. The governor and mining ministry of South Kivu province took measures to regulate semi-industrial mining by Chinese companies around the Itombwe Reserve. These, however, were halted by national authorities who claimed the provincial level didn't have the authority to do so.

On the ground, semi-industrial mining has sparked conflict by prompting the sometimes violent displacement of artisanal miners. This has led some of them to join armed groups, or to an upsurge in violent banditry.

Semi-industrial mining has also led to disagreements between mining companies and local populations around social investments, employment and compensation for the destruction of agricultural fields.

Combined with competition around accessing revenues, these conflicts have contributed to a spate of armed group attacks on Chinese mining operations.

The involvement of high-level officials and the importance of mining income make it difficult to stop destructive mining from taking place in protected areas.

Moreover, closing down artisanal mining operations by force without offering other opportunities to make a living has often proven to be counterproductive. Displaced miners may simply return to mining sites, sometimes getting the help of armed groups to do this.

Where armed groups and army units lose their income from mining, they may resort to other ways to get money, such as violent banditry.

Read more: Shedding light on why mining companies in eastern Congo are under attack

The fact that different branches of the state are at odds with each other poses further difficulties. It's impossible to curb or better regulate mining in protected areas when national and provincial authorities toe a different line or when the military violates restrictions imposed by civilian authorities.

The Congolese agency for nature conservation (ICCN), which is responsible for protected area management, lacks the political clout and resources to make a difference.

For instance, the Okapi Wildlife Reserve covers over 13,000 square kilometres, but the ICCN has only enough rangers to conduct regular patrols in 15% of this area. In some areas, ICCN staff have been found to be complicit in authorising illegal resource exploitation.

What can be done to improve this situation?

To start with, it's important to differentiate between semi-industrial and artisanal mining. Semi-industrial mining, in particular gold dredging, is more destructive for the environment and benefits comparatively fewer people. Banning it from protected areas is more urgent and more feasible.

Banning artisanal mining appears difficult, so better regulating and containing it may be a more successful strategy in the short term. This is what has happened in the Itombwe Nature Reserve, where artisanal mining activities are still permitted in certain parts.

It is also crucial that different agencies and layers of the state cooperate. To promote such collaboration, international donors supporting administrative and security sector reform need to get the message across that profiting from mining in protected areas is not acceptable.

However, it is ultimately up to the Congolese government to ensure that state servants are properly paid and respect the law.