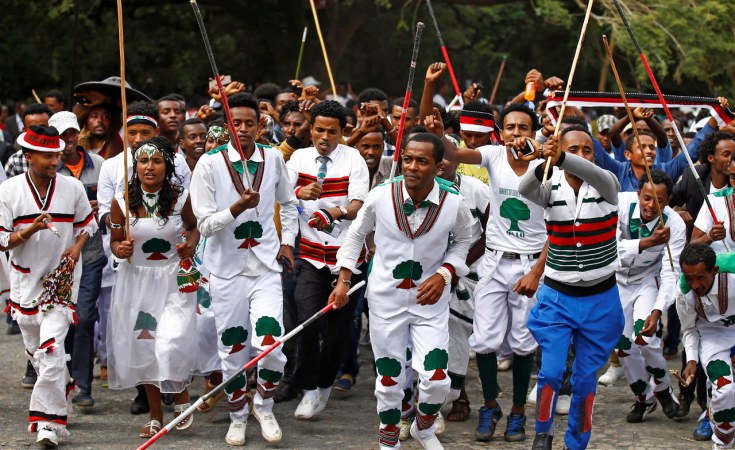 Addis Ababa — Athlete Gudaf Tsegay says despite the recent visit of Tigrayan athletes to Mekelle to meet their family, she returned to Addis Abeba without meeting her family in person.

Athlete Derartu Tullu, President of the Ethiopian Athletics Federation, led a delegation of Tigrayan athletes and members of the Executive Committee and others to Mekelle on 10 January in a bid to reconnect the Tigrayan athletes who were disconnected with their families for the last two years.

But Gudaf told Addis Standard that she didn't meet her family during the visit to Mekelle, "but [being] present there and looking at my people made me joyful," she said.

"I had a wordless feeling in regard to the visit to Mekelle after two solid years but, I didn't get together with my family in person when I arrived at Alula Aba Nega International Airport because some of my family live in Adwa, 223 km from Mekelle", she said, adding that "due to lack of communication network "I couldn't tell them that I was coming to Tigray."

Gudaf was one of the three Tigrayan athletes who represented Ethiopia in the World Athletics Championships 2022, in Oregon, U.S.A. She won a gold medal in the women's 5,000m title, and a silver medal in the 1500m.

Her family became "aware of my visit only after I arrived at Mekelle," she said, and they were nonetheless :happy and told me they could come to Mekelle" if they knew I were coming a few days earlier, "but I couldn't tell them due to the network breakdown."

"we faced challenges and [yet] we came through with gold medals." Gudaf

She nonetheless spoke to her father on the phone from Mekelle and heard other members of her family were okay. "I talked to my father and other members of my family on the phone," she added. She is as much happy and that it was heartwarming to know her friends managed to meet their loved ones.

Athlete Gudaf reflected that the two years she spent without any contact with her family was "the worst moment in my life" and, "it was horrific and difficult." Her homeland Tigray has been under the worst war since November 2020 that has devastated the region of seven million and caused unimaginable suffering to the people.

Gudaf reckons with the wartime as "very rough" and the suffering that Tigrayans endured due to the two year siege, which saw the region completely disconnected from the rest of the world. "We reached at this point by supporting each other" financially and emotionally through "idea sharing," she said, "We resisted everything and we are at this stage," she said, "we faced challenges and [yet] we came through with gold medals."

"I had no expectation that they would come to my home and arrest my husband who coaches and supports me a lot during my training." Gudaf

The other tough time she endured was when "my husband was arrested here in Addis Abeba," she recalls, "I was disturbed and psychologically [impacted]."

The federal government is accused of arbitrarily detaining, forcibly disappearing, and committing other forms abuses against ethnic Tigrayans in capital Addis Abeba and other parts of the country. The widespread arbitrary detentions did not spare Tigrayan refugees who were repatriated from Saudi Arabia.

"I have no political attachment," Gudaf said when talking about her husband being one of them, "I had no expectation that they would come to my home and arrest my husband who coaches and supports me a lot during my training." Her husband, Hluf Yihdego, himself a long distance runner and also from Tigray, has since been released.

"Currently, I am working hard on focusing to have more gold medals... knowing about the welfare of my family from their own voice will play a great role in my future races", Gudaf says of her efforts to put behind the difficult times she endured.

Athlete Gudaf Tsegay is the 2020 Tokyo Olympic bronze medalist in the women's 5000 meters. Among her sensational achievements is also smashing Genzebe Dibaba's 1500m Indoor World Record by more than two seconds with 3:53.09 in Lievin in 2021 February 2021. Genzebe's previous world record was 3:55.17 in Karlsruhe in 2014. AS

Next Story
Tagged:
Copyright © 2023 Addis Standard. All rights reserved. Distributed by AllAfrica Global Media (allAfrica.com). To contact the copyright holder directly for corrections — or for permission to republish or make other authorized use of this material, click here.