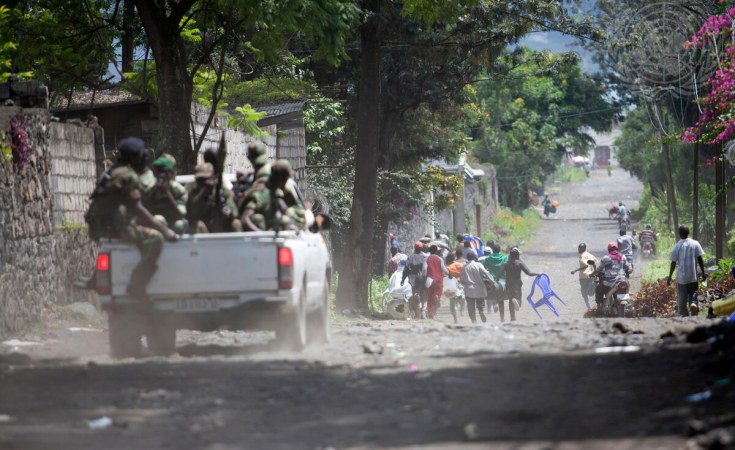 Displaced survivors and witnesses of atrocities at the hands of the armed group M23, which is fighting the army in eastern Congo, have told DW about their trauma as they seek to rebuild their lives.

In the most volatile regions towards to east of the Democratic Republic of the Congo (DRC), hundreds of thousands of people have been displaced by the fighting between the M23 and the Congolese army.

In North Kivu Province, many of those who fled their villages or towns have sought refuge in churches and schools elsewhere. The trauma of what they witnessed and endured at home remains with them.

Over 2,000 people have found refuge in the Masisi territory. DW spoke to some of the survivors of M23 atrocities in the town of Sake.

'The rebels want to exterminate us'

Bakongo Zaire told DW that M23 fighters had killed his wife and child before he came to Sake. "The rebels want to exterminate us. Even at night, they can come and kill us here," Zaire said.

"We need more protection from the government. I can die today as I am old, but at least a child deserves better, because he is the future of this country."

Sake is some 25 kilometers (15 miles) by road from Goma, the capital of the North Kivu province.

Chance Katunda and her two children have also fled to Sake. "During the clashes, I became a widow," she told DW. Her family were preparing to escape from their village of Karenga when the M23 killed her husband.

"I have nothing to eat and no clothes to wear. I suffer in this camp," Katunda said.

Traumtized communities in need of help

Mutsirwa Buyana told DW that he had witnessed atrocities in his village before fleeing to Masisi territory.

"The rebels killed many people. Those in the neighborhood fled after hearing bullets from the bush." They left everything behind. "No one is taking care of our crops," he told DW.

Emmanuel Bifuko, a psychosocial counselor in Masisi territory, said the survivors and witnesses of atrocities who have sought refuge in places like Sake will require support to heal.

"It is necessary that all these people benefit from psychosocial support, so that the events they have undergone do not have repercussions in their lives," Bifuko told DW.

"In the community, there are women [who are] victims of sexual violence, and there is a need for all these people to be supported."

Bifuko works for Tuungane, a community-driven reconstruction and development initiative that is active in eastern DRC. It is funded by the United Kingdom and provides health and other services to around 1,300 communities affected by conflict.

The M23 reemerged in eastern Congo a year ago after about a decade of dormancy. Kinshasa accuses Kigali of supporting the group, but Rwanda has repeatedly denied any involvement.

Anti-Rwanda demonstrations have taken place in the Congolese capital Kinshasa.

In Sake, the widow Bakongo Zaire told DW that the world must hold Rwanda accountable.

"The Congolese continue to suffer, and it is unacceptable that foreigners play a role in destabilizing our country, thereby creating more misery for the people. No Congolese can leave here to go to war in Rwanda," he said.

According to the United Nations , the protection of civilians in eastern Congo remains a major challenge.

Previous Story
Are European Mercenaries Fighting in the DR Congo Conflict?
Next Story
How to Avoid False Narratives Around DR Congo's M23 Conflict

Are European Mercenaries Fighting in the DR Congo Conflict?

How to Avoid False Narratives Around DR Congo's M23 Conflict

Next Story
Tagged:
Copyright © 2023 Deutsche Welle. All rights reserved. Distributed by AllAfrica Global Media (allAfrica.com). To contact the copyright holder directly for corrections — or for permission to republish or make other authorized use of this material, click here.