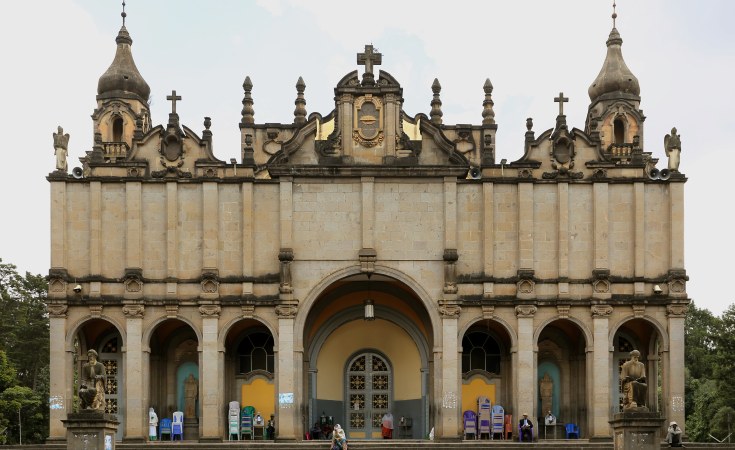 Led by His Holiness Abune Sawiros (PhD), Archbishop of South West Shoa Diocese, together with two other Archbishops, the appointment of 26 bishops: 17 bishops for dioceses located in the Oromia region, and nine bishops for dioceses outside Oromia took place in Haro Beale Wold Church, without the involvement of the Holy Synod, creating widespread shock and anger among many of the church's followers.

His Holiness Abune Mathias I, Patriarch of the Ethiopian Orthodox Tewahedo Church was the first to issue an emergency meeting on the same Sunday, calling the appointment of the bishops an "illegal" act done without the approval of the Holy Synod, and said that "a great event that has targeted the church" has taken place unexpectedly, without the knowledge of the Synod, and without discussions. "We all heard it now, today" he said, and summoned all Bishops of the Church both from the country and around the world for an emergency meeting which is expected to take place this week.

The Patriarch then called on the government to assume its responsibility and ensure security by taking necessary protections on matters surrounding the issue; he has also called on all members of the church, including priests and its followers "wherever you are" to "calm down and follow the matters with "prayers and thoughts."

In a later presser after the appointment, his Holiness Abune Sawiros issued a lengthy explanation on the decision to appoint the 26 Bishops and said that it was made to resolve long lasting problems within the church for failing to serve believers in their native languages and detached of their culture, which resulted in loss of millions of believers over the past years particularly in Oromia and Southern region.

The Archbishop accused the Holy Synod that is currently in office for comprising 85% of its members from only one group and for failing to reflect the church's diversity.

In an emergency meeting on Monday chaired by Chief Priest Belay Mekonnen, the deputy general manager of the Archdiocese, the management assembly of the Archdiocese's office has ordered to suspend those who are accused of having committed a crime of "destroying" the church by illegally appointing bishops in Haro Beale Wold Church from their salary. The meeting also ordered their offices and lodging houses to be sealed and properly guarded.

The administrative assembly held a wide discussion about the "all-round betrayal" of the Church. In the statement issued afterwards, the management assembly accused His Holiness Abune Sawiros and the others of committing a "betrayal by denying the structure (institution) that gave them authority" and called it "very sad." It also ruled out possibilities of reaching at settlement through discussion. "Negotiating with those who have done this under any circumstances is indirectly breaking the laws and regulations of our church."

But those who are behind the decision to appoint the Bishops are undeterred and are threatening to split from the Church if the Holy Synod failed to recognize the appointments.

Merid Tulu, one of the members of the committee set up to find solutions to the problems of the church in Oromia, told Addis Standard that the appointment process was carried out in accordance with the church's rules and regulations, he said, adding that this was done in response to long-standing demands of the followers of the religion.

"The basis of this appointment is the response to the request since last year, especially through the Oromia Clergy movement, to appoint priests who can preach the gospel in the language of the community and maintain the unity of our religion, that was thrown away with contempt," Merid said.

According to Merid, the activities of the Oromia Clergy (which was led by Chief Priest Belay Mekonnen, who later became deputy general manager of the Archdiocese after agreement with Ethiopian Orthodox church patriarchate) were ceased by reconciliation accompanied by "false promises" such as unprecedented evangelism in Afaan Oromo language, opening an Oromo evangelistic college, publishing a bible in Afaan Oromo language, and others. "The requests have been submitted in a letter to the higher administration of the church but have not received an answer."

After the failure of the movement by the Oromia Clergy, a committee was set up to investigate the problems and has been working for more than five months, Merid said, adding that it has held discussions with the wider community of followers of the religion. He added that the committee facilitated the recent appointment of bishops as the questions raised by the wider community need to be answered.

The appointment has been done according to the rules and regulations of the religion, which allows two or three popes to come together and appoint bishops, Merid Tullu said. "This is not an appointment of a new patriarch. And there was no violation of dogma and canon of the religion. We believe in the unity of the church, but requests should be answered. And the condemnation from the Archdiocese has financial motives rather than keeping the unity of the church as most of the church's income generates from Oromia region "

Merid stated that the higher administration of the church "must approve Sunday's appointment of the 26 bishops and proceed to negotiations" if the matter is to be settled peacefully; threatening that "if they choose condemnation and forbidding, it goes to establishing a separate synod and appointing one's own patriarch". AS

Previous Story
Tagged:
Copyright © 2023 Addis Standard. All rights reserved. Distributed by AllAfrica Global Media (allAfrica.com). To contact the copyright holder directly for corrections — or for permission to republish or make other authorized use of this material, click here.