Gor Mahia fans took to social media to express their shock after the Tom Mboya statue in Nairobi's Central Business District was removed. National Museum of Kenya took the statue down and revealed that it would undergo renovations after years of been vandalized. National Museums Director General Mzalendo Kibunjia confirmed the ongoing renovations will cost over U.S.36,000 and it will be ready after four months.
Thomas Mboya was a former Trade Unionist, Cabinet Minister and one of the founding fathers of the Republic of Kenya. The statue had become a revered meeting point for Gor Mahia fans since it was put up nine years ago and the fans always visited and danced around the statute before and after all their matches. 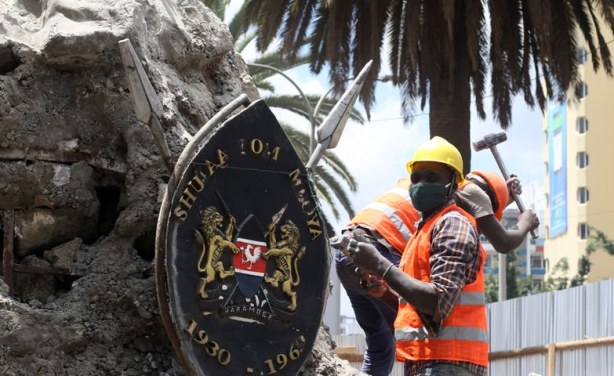 Workers clear what is left of the Tom Mboya statue along Moi Avenue after it was removed to undergo renovations on September 14, 2020.