Protests, violence, and looting continue all over the country as people target government warehouses holding Covid-19 aid. Governors have slapped round-the-clock curfews on a string of states as residents pillaged stocks that were meant for distribution during coronavirus lockdowns. Fuelling the anger are accusations that officials  hoarded food intended for the poor, during the lockdown earlier this year. A coalition of state governors have denied the allegations of corruption, saying that the supplies were held back as a "strategic reserve" in case of a second wave of the virus. Protests have enveloped Nigeria in recent weeks, starting with thousands of protesters, under the banner #EndSARS, demanding sweeping police reforms in the country. The SARS unit has been accused of rape, harassment, extortion, and the killing of innocent people. Human rights group Amnesty International has said at least 12 people were killed by soldiers and police, although the army dismissed the reports as "fake news". 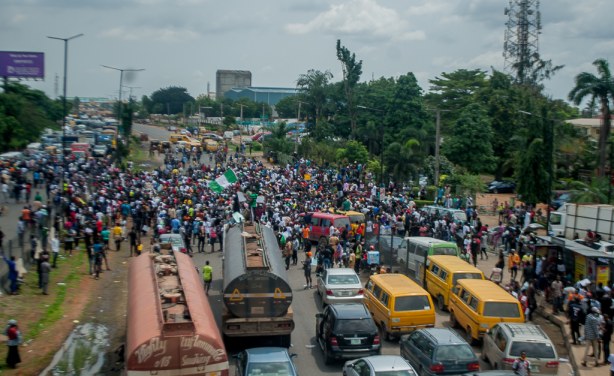 An #EndSARS protest in Lagos, Nigeria