The South African government has begun the process of seeking the extradition from Malawi of fraud-accused pastor and self-proclaimed prophet Shepherd Bushiri and his wife Mary. The pair were granted bail in a South African court on Wednesday November 4. The couple then travelled to Malawi despite surrendering all their travel documents to authorities in South Africa, the Nyasa Times reports. The Enlightened Christian Gathering leader says he and his wife are in Malawi for "safety and security". The Daily Maverick is reporting that both the South African and Malawian governments have denied that Malawian President Lazarus Chakwera gave Bushiri a lift home on his Air Malawi flight on Friday night after an official visit to South Africa. 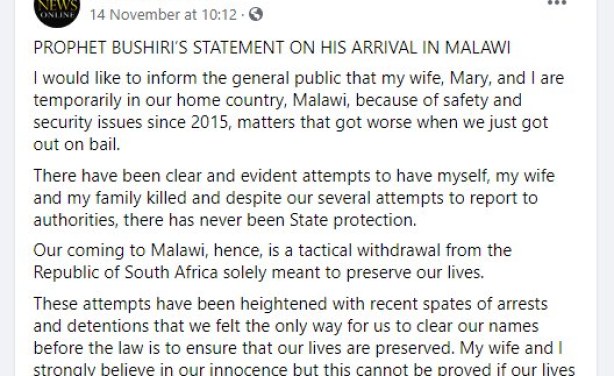 A statement by Shepherd Bushiri on the Facebook page of the Enlightened Christian Gathering Church.