Rhythms of Zamunda, a 16-song Pan African compilation album traces a musical roadmap through west, east, and South African soundscapes and introduces this synergy to listeners worldwide. The album is curated by Sipho Dlamini, the CEO of Universal Music South Africa, and Sub-Saharan Africa. He said "it was important for Def Jam Africa to be involved because the first film was so legendary to Africans in the diaspora. The album boasts contributions from Africa's biggest stars, including Prince Kaybee, DJ Ganyani, Msaki, Tiwa Savage, Tekno, Njelic, Nasty C, Sha Sha, Fally Ipupa, Gemini Major, and others. In the sequel, former prince, Akeem is set to become King of Zamunda when he discovers he has a son he never knew about in America - a street-savvy Queens native named Lavelle. Honouring his father's dying wish to groom this son as the crown prince, Akeem and Semmi set off to America. Coming to America was first released in 1988. 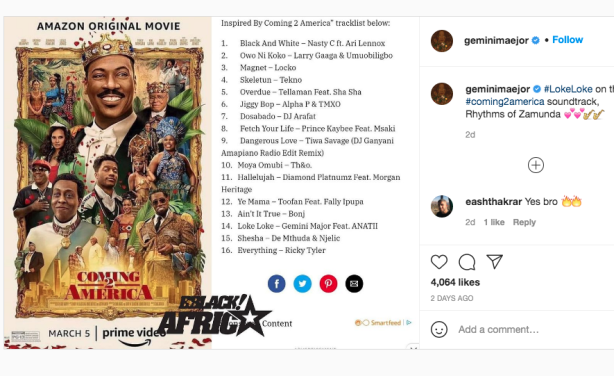