A plastic rainbow-hued boat set sail from Dunga ' harbour' in Kisumu for a 21-day voyage around Lake Victoria. On board, were 13 people on a mission to raise awareness on the threats facing the world's second-largest freshwater lake. Dubbed Flipflopi, the 10-metre long boat that weighs seven tonnes was launched in 2018 during the World Clean-Up Day celebrations in Lamu. It is constructed from recycled plastics, including multi-coloured flip-flops from which it derives its name, an intentional invention as a symbol of awareness in efforts to fight plastics in Kenyan waters. A brainchild of three environmental-conscious friends - Ali Skanda, Ben Morrison and Dipesh Pabari - the Flipflopi has for the last four years been a symbol of a campaign to create awareness against single-use plastics and their pollution. In 2019 it sailed from Lamu to Zanzibar, where they were received with firm commitments from the government of Tanzania. Once Africa's sparkling blue gem, Lake Victoria is now choking from the effects of pollution, especially plastics and other non-biodegradable materials. 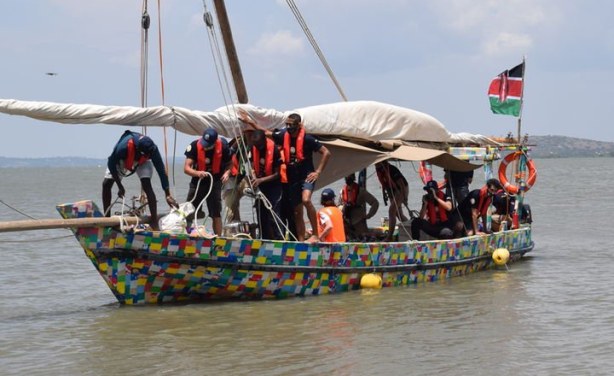