The container ship Ever Given has been dislodged from the Suez Canal where it blocked vessels from navigating the artificial sea-level waterway crucial for international shipping. The canal is again open for shipping traffic.

In the early hours of March 23, 2021, the Ever Given was blown off course by high winds on its way through the Suez Canal. At 400 metres long, the Ever Given is longer than the canal is wide, and the ship became wedged firmly in both banks, completely blocking global shipping traffic, Michael Bell writes in The Conversation. Dredgers, excavators and tug boats worked frantically to free the ship - and the Suez Canal Authority says the Panamanian ship has been successfully refloated.

Egypt earns between U.S.$5 billion and U.S.$6 billion each year in revenues from the Suez Canal, reports VOA. Bell writes that around 50 ships a day pass through the canal under normal circumstances, split almost equally between dry bulk carriers, container carriers and tankers. Some shipping lines have been considering diverting ships around Africa rather than wait for it to clear. 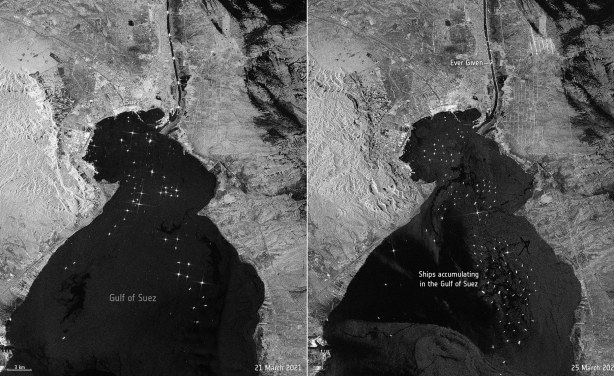 The giant container ship Ever Given ran aground in the Suez Canal on March 23, 2021. The image on the left, captured on March 21, shows routine maritime traffic in the canal with vessels visible every 2 to 3 km. The image on the right, captured on 25 March, shows the 400 m-ship blocking the canal. Ships can be seen accumulating in the Gulf of Suez. The canal connects Port Said on the Mediterranean Sea to the Indian Ocean via the Egyptian city of Suez on the Red Sea.