Embattled Chief Justice Luke Malaba is back at work, defying a High Court ruling which said he ceased to be a judge on May 15, 2021 after he reached the retirement age of 70 years. This comes after Justice, Legal and Parliamentary Affairs Minister Ziyambi Ziyambi and Attorney General Prince Machaya separately filed their notices of appeal against an urgent High Court judgment made on May 15. The government says the noting of an appeal to the Supreme Court effectively suspends the order of the High Court paving way for Chief Justice Malaba to be back in the revered judicial office by operation of law.

Earlier, Zimbabwe's High Court ruled that President Emmerson Mnangagwa's controversial extension of tenure of the country's top judge is illegal. The president extended Malaba's term of office by five years, just hours before he was to retire from the bench. The move was seen as aiming to consolidate Mnangagwa's power.  Malaba has been accused of favouring Mnangagwa's administration since he dismissed opposition leader Nelson Chamisa's presidential election petition after the 2018 election.. 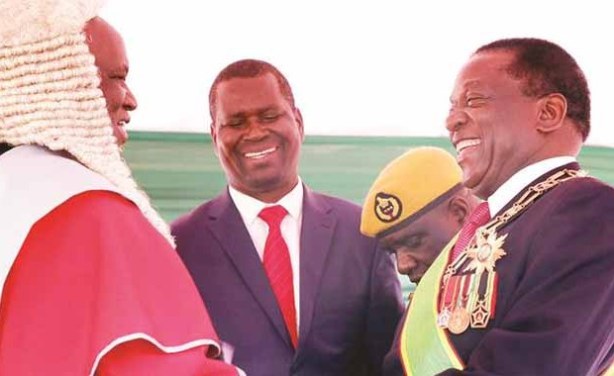 President Emmerson Mnangagwa is congratulated by Chief Justice Luke Malaba after his inauguration at the National Sports Stadium in Harare (file photo).