Since 2015, the government has issued more than 25,000 Certificates of Customary Ownership (CCOs), giving customary landholders documentary evidence of their tenure, with the aim of reducing land conflicts and improving the financial security of rural families. However, cultural leaders have said the government's attempts are clashing with  traditional concepts of what property is, and who gets to define it. More than three-quarters of all land in Uganda is held under customary tenure systems, according to government figures. The concept of certifying customary land is outlined in the 1995 constitution, which gives legal recognition to customary tenure for the first time. Certificates allow people to use their land as collateral for bank loans, helps women protect their inherited land from being taken by people from outside their communities. It could also allow for better compensation for villagers if their land is taken for factories, commercial farming and infrastructure projects, Oxfam's Uganda Land Rights Co-ordinator Jimmy Ochom has said. A 2019 survey by the Hague Institute for Innovation of Law found that nearly 60% of Ugandan widows have experienced a land dispute. 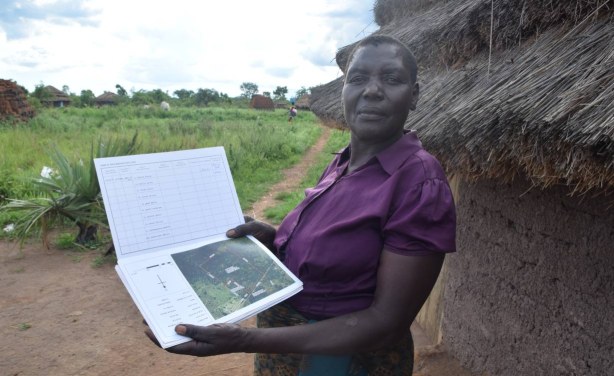 Santa Otyeka with her certificate of customary ownership, in Pader district, Uganda, on May 5, 2021 (file photo).