As chaotic scenes played out in pockets of KwaZulu-Natal and Gauteng, leaving many businesses gutted and looted by protesters, South African President Cyril Ramaphosa told the country in a televised address that it was vital that calm and stability be restored without delay. "We are therefore mobilising all available resources and capabilities to restore order," he said. Measures include the deployment of the South African Defence Force to support the police, the recall of police officers from leave and the prioritisation of the prosecution of suspects. The National Security Council, chaired by the President, will meet twice a day to coordinate all measures necessary to restore stability.

The president's speech came 24 hours after he addressed the nation on lockdown regulations.

Looting and lawbreaking that started in South Africa's KwaZulu-Natal province after the imprisonment of former president Jacob Zuma spilled over into Gauteng province. The Daily Maverick's Julia Evans reported that protests in Gauteng, ostensibly against Zuma's imprisonment, escalated into criminality, where civilians damaged property and roads, looted businesses and rioted, affecting public transport and power services. 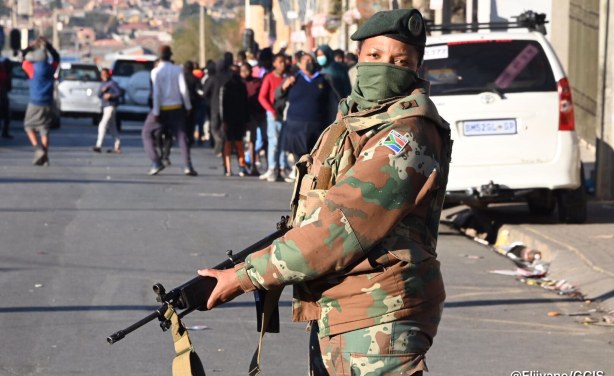