Nasir Hassan Haji alongside 12 other women in Jambiani village on the Indian Ocean coast, never thought of themselves as farmers or swimmers, but they have had to learn to swim for their floating sponge farm businesses to stay afloat. These farmers have come to rely on the climate-resilient, natural sponges bobbing on thick ropes, where they grow for months before the women harvest, clean and sell them to shops and tourists.

Research by the State University of Zanzibar shows that more than 90% of seaweed farmers on the island are women, and that they have seen changing water temperatures, rainfall patterns and ocean salinity hit production in recent years.

Using data that shows Zanzibar warming over the past 40 years, a 2012 study from the Global Climate Adaptation Partnership and Britain's former Department for International Development, projected the island's average maximum monthly temperature would rise by 1.5 to 2 degrees Celsius by the 2050s. 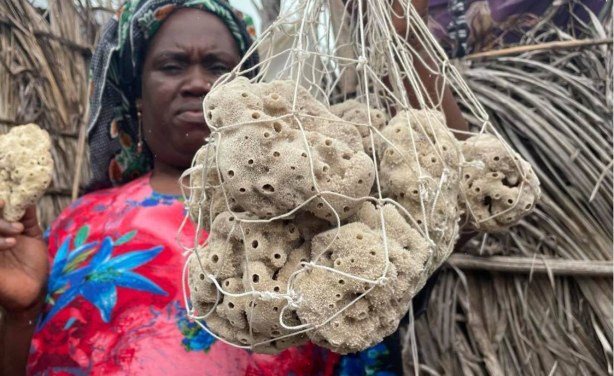 Nasir Hassan Haji holds up her harvested sponges in a bag from her home in Jambiani in Zanzibar, Tanzania. June 21, 2021.