A new United Nations report details the dire - and worsening - human rights situation over the past year in the Central African Republic (CAR), where armed groups carried out a violent bid to disrupt elections. In response, the country's defence and security forces launched military operations to retake territory from them. The joint report, written in French, by the UN Human Rights Office and MINUSCA, the UN Mission in CAR, covers the period from July 2020 to June 2021 in the context of the presidential poll, held in December 2020, and legislative elections, which took place in December 2020, and in March and May 2021.

The Human Rights Division of MINUSCA documented 526 incidents of abuses and violations of human rights and international humanitarian law across the country during this period. These violations affected at least 1,221 victims, including 144 civilians. Among the documented abuses and violations are extrajudicial and summary killings, torture and ill-treatment, arbitrary arrests and detentions, unnecessary and disproportionate use of force, conflict-related sexual violence and serious violations against children, including their recruitment by parties to the conflict.

The report calls on armed groups to cease all attacks on the civilian population and to re-engage in the peace process. The report also urges the government to take appropriate measures to hold those responsible for human rights violations and abuses accountable and to create a protective environment for civilians and humanitarian workers. 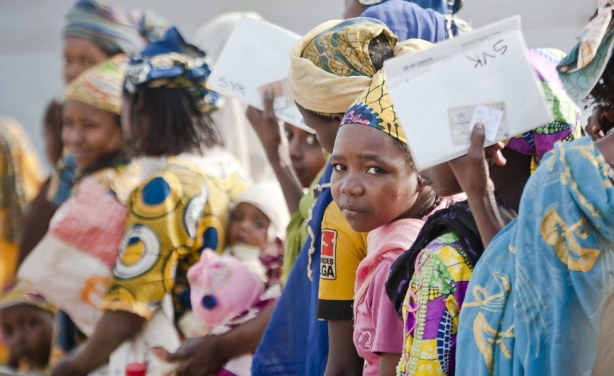 Central African mothers and children queue for food at the Timangolo refugee centre in Cameroon in 2019 (file photo).