Isabel dos Santos, at one time the wealthiest woman in Africa, must surrender a stake in the Portuguese energy company Galp worth an estimated U.S.$500 million, an international tribunal in the Netherlands has ruled.

In its 2020 Luanda Leaks investigation, the International Consortium of Investigative Journalists revealed that dos Santos and her husband Sindika Dokolo had obtained the stake for just a U.S.$15 million initial deposit, in a controversial deal made with Angola's state oil company - overseen at the time by dos Santos' father, Angola's then-president Jose Eduardo dos Santos.

In 2006, Angola's state oil company, Sonangol, sold 40% of its interest in joint venture company Esperaza to Exem Energy, a Dutch firm owned by Dokolo. Sonangol then sold to Dokolo's company a U.S.$99 million stake for an initial U.S.$15 million deposit. That same stake is now worth more than U.S.$500 million.

The deal was "tainted by illegality, enabling Ms dos Santos directly or through her husband Mr. Dokolo, while using her position as daughter of the Angolan President to reap an extraordinary financial gain to the detriment of Angola," according to the ruling. 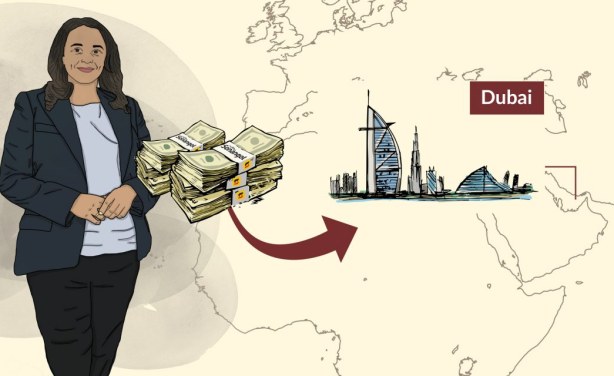