A flagship United Nations science report says the average global temperature is likely to reach or cross the 1.5-degree Celsius warming threshold within the next 20 years, bringing stronger droughts, heatwaves, floods and storms. The report warns that no one is safe from the accelerating effects of climate change and says there is an urgent need to prepare and protect people.

The August 9, 2021 report from the Intergovernmental Panel on Climate Change (IPCC), written by 234 scientists, says global warming of about 1.1C has already brought more severe droughts and storms to rising seas. Those will all increase with further warming, but it is not too late to cut climate-heating emissions to keep temperature rise to internationally agreed goals of "well below" 2C and ideally 1.5C - which would help stop or slow down some of the impacts, the report says.

IPCC Chair Hoesung Lee says the report provides an improved understanding of climate change. "It tells us that it is indisputable that human activities are causing climate change and making extreme weather events more frequent and severe," he said, describing it as a "valuable toolbox" for negotiators at November's COP26 climate talks. The talks in Glasgow, Scotland are regarded as one of the last opportunities to secure promises to cut global emissions by nearly half by 2030, the level needed to keep the 1.5C warming limit in sight.

Youba Sokona, vice-chair of the IPCC and special advisor for sustainable development at the South Centre think-tank, said the report would help policy makers in Africa improve their ability to understand climatic changes and anticipate what may come. That would allow them to design more resilient infrastructure, such as larger dams in drought-prone areas or higher flood defences in cities, and seek finance for such projects, he told Thomson Reuters Foundation by video call from Bamako, the capital of Mali. 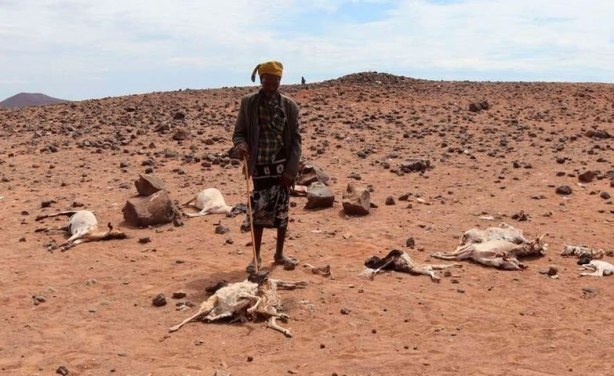 Residents of Bubisa village in Marsabit County, Kenya show the devastating effects of drought in this picture taken on April 4, 2021.