More than 200 people have marched from Loftus stadium to the Union Buildings in Pretoria to protest against corruption in the health system, a root cause of failing public health facilities, writes Mosima Rafapa for GroundUp. According to the Treatment Action Campaign (TAC), 90% of public health facilities in South Africa are in a poor state.

The protest called on President Cyril Ramaphosa "to act quickly to bring all perpetrators of corruption and financial mismanagement and maladministration to book". TAC national chairperson Sibongile Tshabalala said the march was not merely the continuation of the call to fix Gauteng's public healthcare system. Tshabalala said the march called on the Presidency and the minister of health to take responsibility and act fast in making sure that those who have stolen public funds from the department of health are held accountable, and that criminal charges are laid against them.

Citing a graft probe that implicated former health minister Zweli Mkhize, TAC general secretary Anele Yawa said: "We call on the Minister of Health to suspend all officials implicated in the Digital Vibes corruption scandal with immediate effect and to open criminal cases against them. We demand to know what systems will be put in place to recoup this money stolen from the health department." 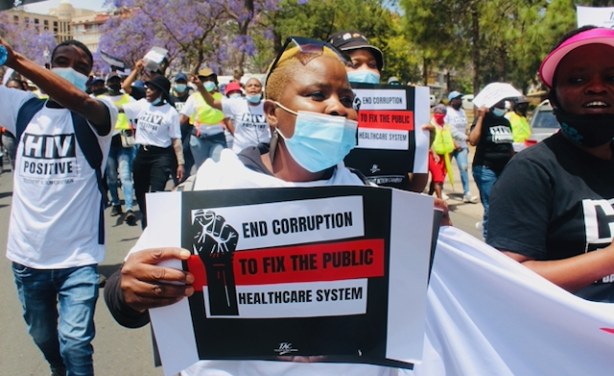 More than 200 people marched from Loftus stadium to the Union Buildings in Pretoria on Monday over the poor state of public health services.