Africa is Warming More, and Faster, Than Rest of World - Report

Climate change will expose up to 118 million extremely poor African people to drought, floods and extreme heat by 2030 if it is not addressed urgently. It could cut gross domestic product by up to three percent by 2050. And East Africa's iconic mountain glaciers are disappearing. These are the dramatic conclusions of a new report published on October 19, 2021 by the World Meteorological Organization (WMO) in partnership with the African Union Commission, the Economic Commission for Africa and other groups.

In his foreword to the report, the WMO Secretary-General, Professor Petteri Taalas, says Africa is being hit by higher temperatures, a rise in sea levels and extreme weather and climate events such as floods, landslides and droughts.

The African continent is home to 17% of the global population but is responsible for less than 4% of greenhouse gas emissions, which are leading to climate change. The report finds changing precipitation patterns, rising temperatures and extreme weather triggered by climate change are happening globally, but notes these events are occurring with greater frequency and intensity in Africa. 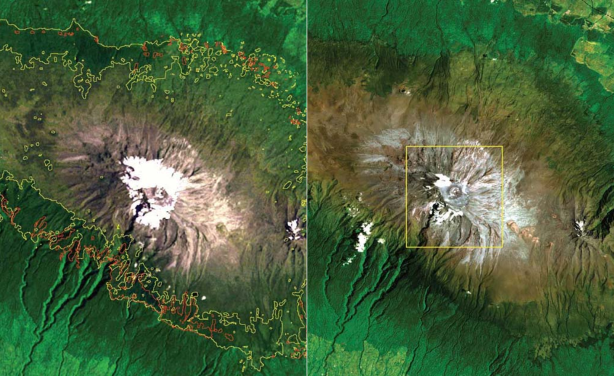 Left, a satellite image of Mount Kilimanjaro from 1976. On the right, the decrease in the glacial area can be seen clearly in a 2006 photograph.