Sudanese security forces arrested demonstrators in Khartoum on Wednesday, including three leading pro-democracy activists, as the World Bank and the African Union took steps to increase pressure on the leaders of the October 25, 2021 military coup.

The World Bank says it has paused payments to Sudan, while the African Union suspended the country after military chief General Abdel-Fattah Burhan said that the army's overthrow of the country's transitional government was necessary to avoid a civil war, according to a Voice of America report.

Deposed Prime Minister Abdalla Hamdok and his wife, who had been detained on Monday October 25, 2021, were allowed to return to their home late on October 26, 2021 but were "under close surveillance," a statement issued by his office reported. The United Nations Integrated Transition Assistance Mission in Sudan (UNITAMS) said on Twitter on October 26, 2021 that the ambassadors of France, Germany, the UK, the US and the European Union had met Hamdok at his residence. "Pleased to find him in good health. We continue to call for full restoration of his liberty," the tweet said.

The U.N. Security Council met privately to discuss the situation. The United States, along with council members Britain, Estonia, France, Ireland and Norway, called for the session. UN Special Representative for Sudan Volker Perthes briefed them from Khartoum.

Sudanese protesters took to the streets after the coup. General Burhan declared a nationwide state of emergency and announced the end of the joint civilian-military council that has been running the country for the past two years. 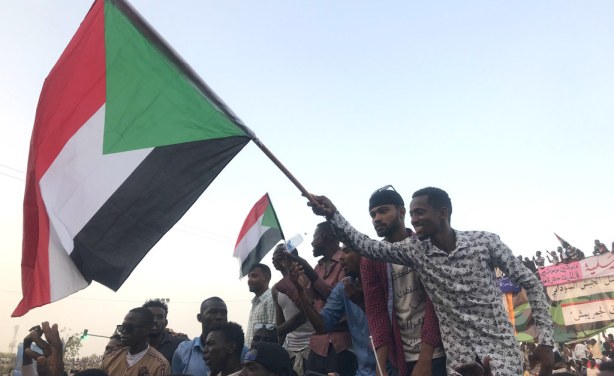 Protesters in the streets of the Sudanese capital, Khartoum in April 2019