Ugandan police say that the twin explosions that hit Kampala at a police checkpoint and Parliamentary Avenue on Tuesday November 17, 2021 were carried out by three suicide bombers who died instantly.

Local publication the Daily Monitor reports that police also said three civilians had been confirmed dead and 33 others injured. The number of fatalities could be higher than reported so far.

Five of the injured are in critical condition, according to police spokesperson, Commissioner of Police Fred Enanga.

Enanga told journalists in Kampala that the police checkpoint attack was carried out by one suicide bomber who was captured on CCTV camera carrying a backpack before he detonated it.

Two civilians died on the spot and 17 others were injured and evacuated from the scene to the hospital. The Parliamentary Road attack was conducted by two suicide bombers riding on two boda boda motorcycles. One civilian was killed in the explosion.

Police said the fourth suicide bomber was pursued and arrested after he was shot and disabled by counter-terrorism operatives.

The explosions, which happened three minutes apart, were carried out by suspected domestic terrorists linked to Allied Democratic Forces using Improvised Explosive Devices, according to police. 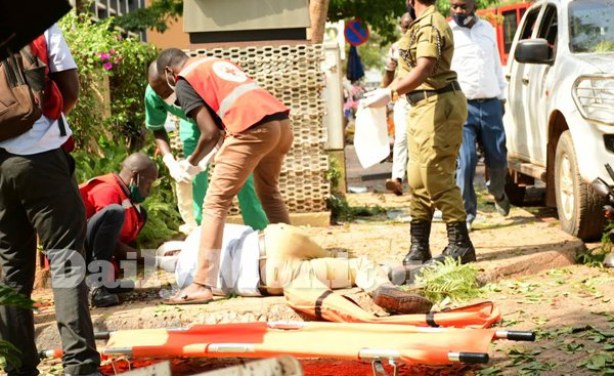 Police and Red Cross officials attending to one of the people who were injured in an explosion at Parliamentary Avenue, in Kampala on November 16, 2021.