Africa is representing the best artists in the game.

Wizkid also has his 'Made in Lagos' album nominated for Best Global Music Album at The Grammys, alongside Femi Kuti and son Made Kuti's 'Legacy +', Beninese singer-songwriter Angelique Kidjo's 'Mother Nature' in collaboration with Nigerian powerhouse Burna Boy and Ghanaian Rocky Dawumi's 'Voice of Bunbon Volume'.

Nigeria's self-proclaimed African Giant, Damini Ogulu, better known as Burna Boy, is at it again as he has been nominated for the third time in a row. He was first nominated for the Grammy's two years ago in the Global Music Award category with his album, African Giant, but lost out to Angelique Kidjo. However, the singer was nominated in the same category in 2021 with his album, Twice As Tall, and he clinched the award.

South Africa's Nkosinathi Maphumulo, popularly known as Black Coffee,  has been nominated in the category Best Dance/Electronic Album for his album Subconsciously. He goes up against Illenium, Major Lazer, Marshmello, Sylvan Esso, and Ten City for the award. 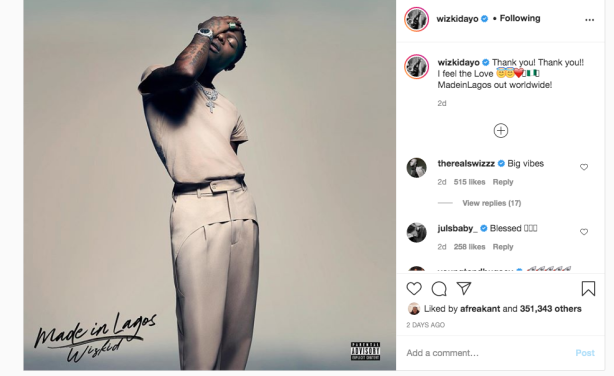 Wizkid releases a new album, Made in Lagos (file photo).