The people of the Okun Alfa costal community in Lagos, Nigeria, have had to move multiple times due to the encroaching waters of the Atlantic Ocean, but land, and time is running out, according to locals.

Muftau Ayodele, 75, who is a community leader, says that the shoreline is littered with derelict, crumbling buildings and houses, swallowed by the rapidly advancing ocean, while many others are gradually sinking into the ocean.

Now, Okun Alfa faces extinction, as the ocean is about to take away what is left of the community - just a small strip of land sandwiched between the ocean and land belonging to another community.

Many of the coastal communities in Lagos face a similar threat of extinction due to rising sea levels, an environmental problem attributed to climate change. The Lagos State environment ministry says the sea-level rise is likely to be the most significant impact of climate change in the long term.

Environmentalists like Jakpor say authorities are not doing enough to protect Nigeria's coastal communities from rising sea levels. In Lagos, some groups like the Nigerian Bar Association's Ocean Surge sub-committee, are partnering with the government in a bid to save the vanishing coastlines. 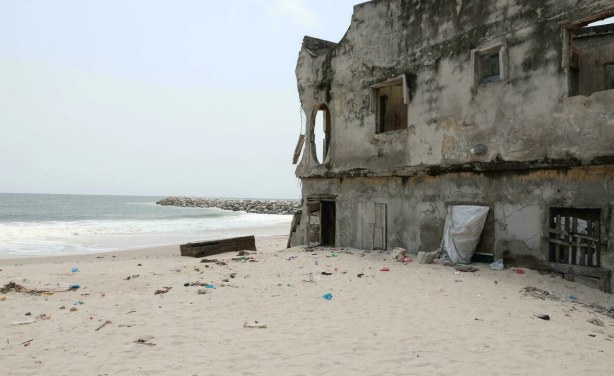