'Rights to Education in Cameroon Under Attack by Separatists'

According to Human Rights Watch (HRW), systematic and widespread attacks by armed separatist groups on students, teachers, and schools in Cameroon's Anglophone regions since 2017 have had a devastating impact on children's right to education.

An HRW report says the groups have killed, beaten, abducted, threatened, and terrorized students and education professionals, harassed and intimidated families into keeping their children out of school, and burned, destroyed, damaged, and looted school buildings.

The 131-page report, They Are Destroying Our Future: Armed Separatist Attacks on Students, Teachers, and Schools in Cameroon's Anglophone Regions, documents scores of education-related attacks by armed separatist groups in the English-speaking North-West and South-West regions between March 2017 and November 2021.

Voice of America reports that separatists have described the report as grossly exaggerated. Capo Daniel, deputy defence chief of the separatist group Ambazonia Defense Council, is quoted as saying that the military also carries out attacks on education.

The crisis in the Anglophone regions began in late 2016, when Cameroonian security forces used excessive force against peaceful demonstrators led by teachers and lawyers protesting the perceived marginalization of the country's minority Anglophone education and legal systems and their assimilation into the Francophone systems. Armed separatist groups, seeking independence for the two English-speaking regions have since emerged and grown, and education soon became a primary battleground. 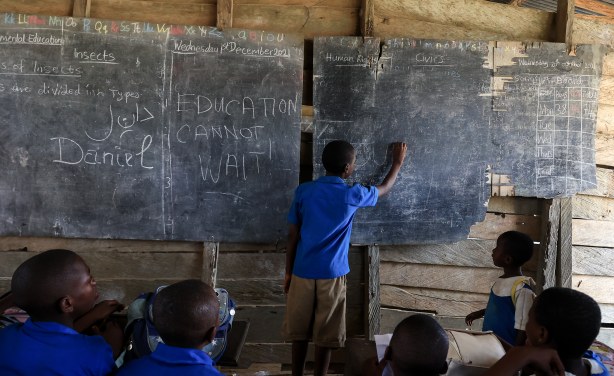 A student writes on a blackboard at the Souza Gare school in the Littoral region, Cameroon. The school hosts displaced children who have fled the violence in the North-West and South-West regions (file photo).