Eid al-Fitr prayers at Addis Ababa Stadium, in the capital Addis Ababa, were disrupted after gunshots and teargas were discharged in the large crowds. Journalists at the scene confirmed that blasts were heard when prayers commenced, prompting the attendees to run in different directions.

Hundreds of thousands had gathered to celebrate the Eid al-Fitr holiday which marks the end of a month of fasting. However, during the prayers, some attendees began protesting the killing of at least 12 Muslims in a majority Christian city of Gondar last week.

Eyewitnesses said that several people were arrested in the clash. Images on social media showed the historic Meskel Square deserted after the incident.

Some worshippers used the square to pray, unable to get into the stadium where the official celebrations were taking place. A member of the Addis Ababa High Council of Islamic Affairs told AFP that the cause of the clash was not clear. A police officer had fired a round of tear gas at the crowd, but this was reportedly, unintentional. 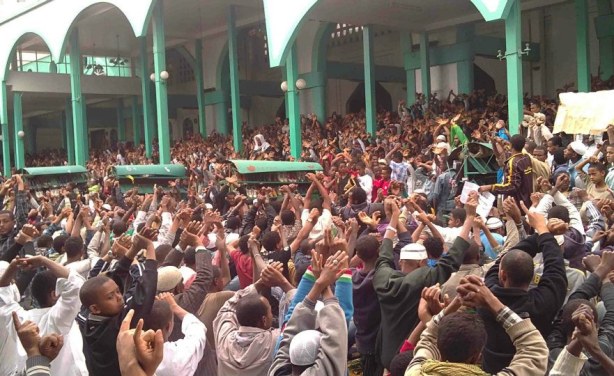 Muslims in Addis Ababa protest against what they perceive as government interference in religious affairs (file photo).